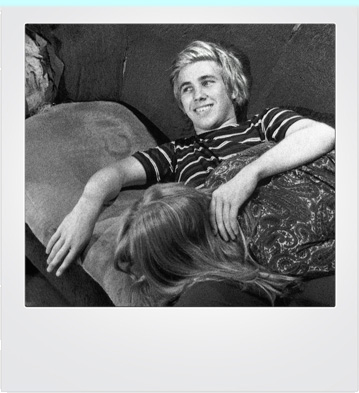 Chuck Wein died of heart failure on 18 March 2008. There was a ocean send-off of his ashes on May 19th at "swamis" - the term used by surfers for the surf breaks behind the Self-Realization Fellowship Temple and Ashram Center in Encinatas - as per Chuck's request. Friends who attended the ceremony included Pamela Des Barres, Joel Tudor, and painter Lance Jost.

"Edie and I were mock elitists in fellowship based upon how fucked-up everyone else was. I was her roommate, shrink, astrologer, and Tarot instructor. I spent the Sixties adventuring in the Far East, managing bizarre nightclub acts like Rosita the python lady, a French drag queen and two over-the-hill Australian strippers. I spent '62 in Copenhagen stoned on absinthe. In '63 I sat at the Cafe de Paris in Tangier long enough to be asked to cover the Algerian/Moroccan border war for the English papers. I attended Harvard in the Leary acid-experiment days. Now I am too busy receiving ancient friends to describe my present trans-Amazon discoveries... besides, I'm sure to attract the most purient of interest." (EDIE450)

After leaving Warhol's Factory, Wein went on to work on the non-Warhol film Ciao! Manhattan starring Edie Sedgwick and would also direct Rainbow Bridge featuring Pat Hartley who Warhol had shot for a Screen Test. Wein's role in the conception of Ciao Manhattan is noted in the end credits of the film which state "Black and white sequences are based upon a story by Chuck Wein and Genevieve Charbin."

Edie and Chuck get photographed