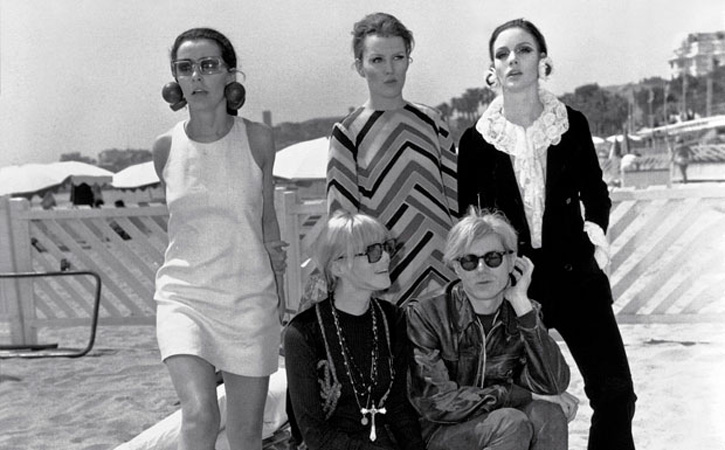 Prior to going to Cannes, Nico had been performing at the Dom. The first Village Voice ad for her solo show in 1967 appeared in the February 2nd issue of the Voice. People could watch The Chelsea Girls at the York Theatre and then watch one of its stars performing live at "The New Mod-Dom singing to the sounds of The Velvet Underground." 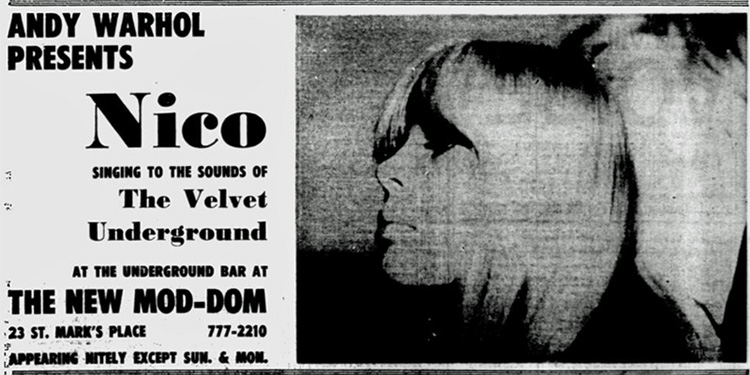 At different times, Nico's support act included the folk singer Tim Buckley and the German-born singer-songwriter, Jackson Browne who has been romantically linked to Nico during 1967. (Browne wrote two songs on Nico's album, Nico: Chelsea Girl, which was released later in the year - in October 1967.)

An ad for Nico's "nitely" appearance at the Dom that also included Tim Buckley appeared in the Village Voice issue of February 23, 1967. 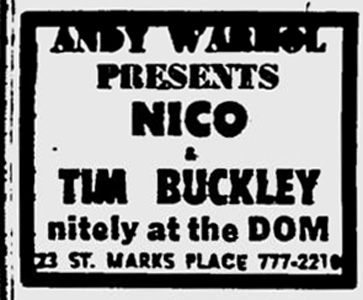 The first ad which mentioned Jackson Browne was in the March 9, 1967 issue of the Voice which also included a showing of Andy Warhol's film Vinyl. 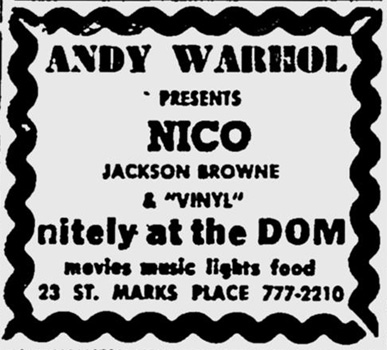 The following week the ad included Nico, Browne and a screening of Warhol's film, Bufferin Commercial:

The last Village Voice ad for Nico appeared in the April 27th issue, the day the Cannes Film Festival began. Beginning with the next issue of the Voice, (May 4, 2016), The Dirty Shames were advertised as playing at the Dom. (Presumably this was the Toronto-based band, The Dirty Shames, which included Amos Garrett on guitar who would later do the guitar solo for original version of the song, "Midnight at the Oasis.")

The Gymnasium opened on March 24, 1967, with performances continuing into April 1967.

As with the final ad for Nico at the Dom, the final ad for The Velvet Underground at The Gymnasium also appeared in the April 27th issue of the Voice. The Cannes Festival opened on the 27th and the ads were presumably for performances in advance so Warhol and his entourage probably didn't leave for the festival until it had officially started.

According to Paul Morrissey the screening of The Chelsea Girls had already been announced before Warhol and his entourage left for Cannes. Although no specific date had been granted, "it was part of the programme." Morrissey makes reference to the arrangement in a quote about a trip to London they took on their way back to the U.S. where they showed the film in the flat of the London art dealer Robert Fraser.

I was with Andy at the Cannes Film festival in 1967. We connected with Robert [Fraser] in London right away - he was really nice.

We had the print of Chelsea Girls with us when we got to London. We'd taken it to Cannes to show at the film festival, and there were so many reels and it was so expensive that we'd taken it in our luggage. Andy had paid for seven or eight people to go. Some were in the film, some were friends of others. There was a whole bunch of us: Nico and Eric, Gerard, Susan Bottomly and someone else. But they never screened it. They had announced it, it was part of the programme, but they hadn't given it a date. They didn't know how to screen the film. They needed two projectors and two screens, and I had to try and show them how to do it. Then they were afraid there'd be some scandal because of ten seconds of male nudity, which they'd heard about but never seen. They never screened it. They refused to show it. The first time ever that an invited film was never screened.

And then we left and took it to Paris and showed it at the Cinematheque, and then took it to London, all in our suitcases. And we met Robert and we must have shown it in Robert's apartment. He was renting his apartment from Kenneth Tynan and I was very impressed by that. It was pretty empty, that apartment - we went over there a number of times. Robert would just call up Paul McCartney or John Lennon. A lot of people came. Paul McCartney lent us one of the projectors. (GB134-5)

Morrissey says that before London, they showed the film at the Cinematheque in Paris, but other sources make it unclear as to whether it was actually shown in Paris at that time. In Popism, a screening in Paris is mentioned but without the presence of Warhol. Pat Hackett, writing as Warhol in Popism, says "Taylor [Mead] had planned to stay in Europe until the Vietnam war was over, but already in '67 he was beginning to get tired of France, and when he saw Chelsea Girls screened at the Cinematheque in Paris, he called me [Warhol] right up at the Factory." Warhol could not have been in Paris when Mead saw the film because Mead called the Factory right after seeing the film. (POP241) But according to Paul Morrissey, after Cannes, "we left and took it [The Chelsea Girls] to Paris and showed it at the Cinematheque, and then took it to London." (GB134-5)

Later in Popism, Hackett (writing as Warhol) refers to an "interview" in Cahiers du Cinéma "when we'd gone to Cannes with Chelsea Girls." (POP271) But the interview referred to was a reprint of the Gretchen Berg interview that Warhol had done in New York. There are a number of articles about The Chelsea Girls in the English version of the May 1967 issue of Cahiers du Cinéma, but none of the articles mention a Paris screening.

In London, Robert Fraser's friend "Stash Klossowski" aka "Stash De Rola" (aka "Prince Stanislaus Klossowski de Rola"), who was also a friend to the Rolling Stones and the Beatles, recalls bringing Paul McCartney's 16 mm sound projector to Fraser's flat so they could project The Chelsea Girls on two screens.

Robert [Fraser] called and asked me to bring Paul's 16mm sound projector, because Chelsea Girls needed two projectors used simultaneously. So I took it over, arrived at 23 Mount Street and found about fifty or more people crammed in, lying all over the floor, all the Warhol entourage. We showed the movie and someone complained about the noise and the police came.

Robert had this amazingly arrogant attitude towards the police which stopped them coming in. They tried. They were pointing to people passed out on the floor, saying, 'Is he all right?', but Robert just ignored this and ordered or pushed them back out on to the landing. (GB135)

In New York, the final ad for the screenings of the film at the St. Marks Theatre appeared in the May 31, 1967 issue of the Village Voice. In June 1967, the film was banned in Boston. 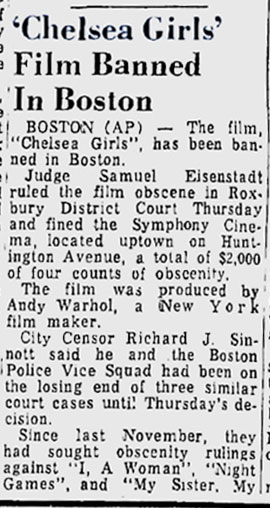 According to Warhol biographer, David Bourdon, when the film played Boston, the cinema was raided by the vice squad and the manager was found guilty of four charges of obscenity and fined $500.00 for each charge. Bourdon recalls that Andy was "delighted" as it meant that he would be able to say that the film had been "banned in Boston" - "traditionally a publicist's dream." (DB254)