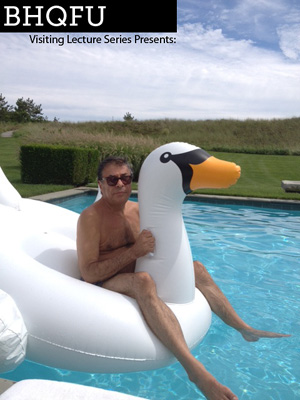 Bob Colacello will doing a talk on his time with Warhol at BHQFU in Manhattan on Sunday 3 February 2013 at 2 p.m. Colacello was an editor of Interview magazine and wrote a regular column for the magazine as well as the book Holy Terror: Andy Warhol Close Up - his gossipy account of what it was like working for Warhol, published after Warhol's death.

Details of the talk here.

Conrad Ventur at the Rokeby

A selection of photographs taken by Conrad Ventur of Mario Montez will be part of a group exhibition, "Montezland", at the Rokeby Gallery (London) which opens 31 January 2013 and runs until 13 March 2013.

In addition to being Warhol's first transvestite superstar, Montez appeared in a number of Jack Smith films - two of which will be shown on 4 February 2013 at the gallery - Jungle Island (1967) and I Was a Male Yvonne De Carlo (1967-'70s). In 1966 he played Lupe in Jose Rodriguez Soltero's film of the same name, made the year after Warhol's film Lupe starring Edie Sedgwick.

Details on the exhibition here.

Paul Morrissey at the Film Forum 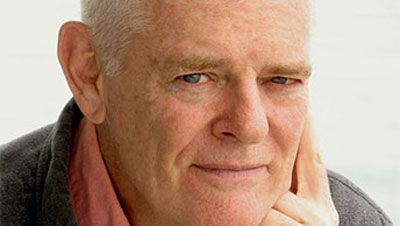 The Bright Lights interview with Paul can be found here.

The Gershwin Warhol party in 3D 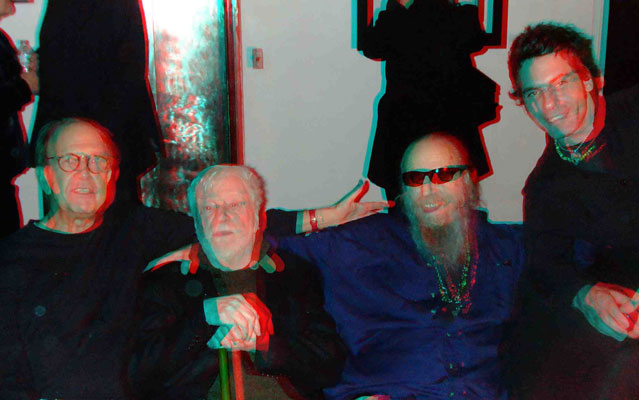 Photographer Robert Munn has sent in some 3D photos of the recent Warhol party at the Gershwin - you'll need a pair of the old-fashioned 3D glasses to get the full effect - and playwright Robert Heide has contributed a report on the event as follows:

"The last party at the legendary Gershwin Hotel – CHRISTMAS WITH ANDY – was held on Saturday nite December 15 2012.  In the media room the walls and ceiling were covered with silver tinfoil as in the original Warhol factory.  The film of  the play The Bed by Robert Heide with footage from Warhol's associate, Danny Williams, was shown three consecutive times; and the movie runs for one hour.  The lobby and main red room at the Hotel were covered with superb Billy Name photos from the l960s heyday of the Silver Factory.  The place was filled to capacity and the big bash was considered by many to be the party of the Holiday Season. 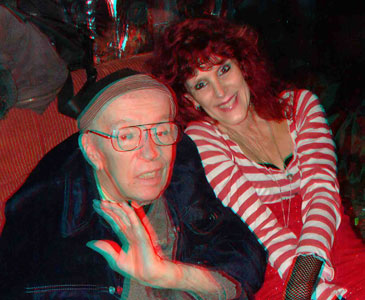 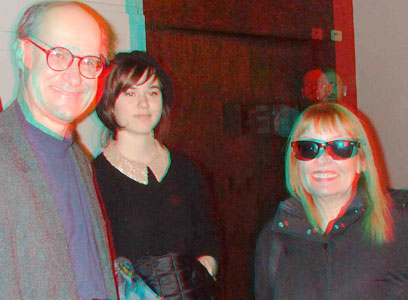 Taylor Mead was there for the festivities honoring Andy as was Billy Name who held court in the main lobby.  Bibbe Hansen showed up with husband Sean Carillo and her handsome grandson Aubrey.  James Warhola also joined in the fun with his daughter Uma in tow as did  Jimmy Rado of Hair with actors Gordon Ramsey and John Uecker.  As well Walter Steding came with his wife and daughter Georgia contributing to the idea that this event was indeed like a big family affair.  Famed photographer Marsha Resnick clicked away.

Billy Name, by the way, is the Godfather of the party hostess Suzanne Tremblay’s son.  Time goes on.  Billy’s new agent-manager Dagon James, editor and publisher of Lid magazine who curated the photo exhibit and Night magazine’s Anton Perich were all on hand.  Paco Underhill came to hang out.  Recently he lectured on shopping (he is an expert on why and what people buy) at the Warhol Museum in Pittsburgh and certainly he must have brought forth Andy’s collecting and buying habit. 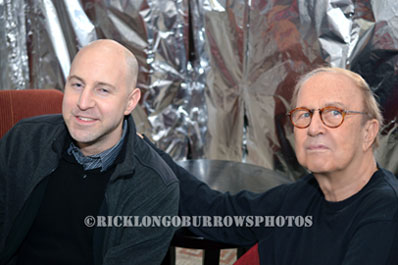 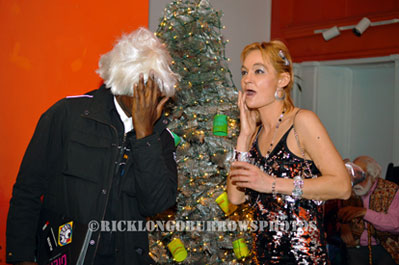 Ivy Nicholson and her stunning daughter Penelope Palmer dressed entirely in silver danced the night away.  Party host and Gershwin Hotel events manager Neke Carson was ecstatic over the enthusiasm of the crowd.  The hoopla also attracted a great many young and fashionable New Yorkers who enjoy being out-on-the-town.  Warhol book collector Ben House came with Thomas Kiedrowski who was being honored along with Catherine Johnson for their contributions to the world of Warhol books.  Warhol scholar Victor P. Corona, looking like silent screen star Ramon Novarro, had the beautiful actress Jocelyn Saldana on his arm.  Just over a week ago Jocelyn performed at the Gershwin as Valerie Solanas with dialogue taken from the Solanas book S.C.U.M. 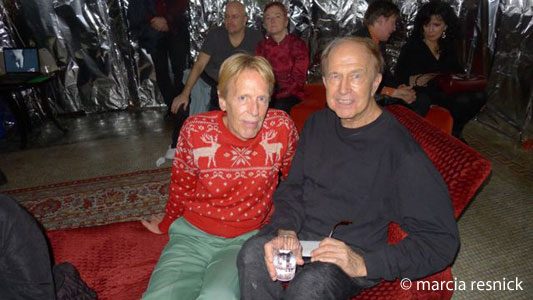 At party’s end which went on to well after midnite John Gilman and myself headed homeward downtown to the Village, a couple of exhausted celebrants.  All in all it was a Merry Christmas event that I’m sure Andy would have loved; but, alas, where was Liz Taylor, Tennessee Williams, Truman Capote, Judy Garland and Edie Sedgwick all of whom partied at the Silver Factory?  Yet, Andy is still somehow at the center of things.

John Gilman and Robert Heide's blogspot can be found here.

Bibbe, Robert and Billy at the Warhol party 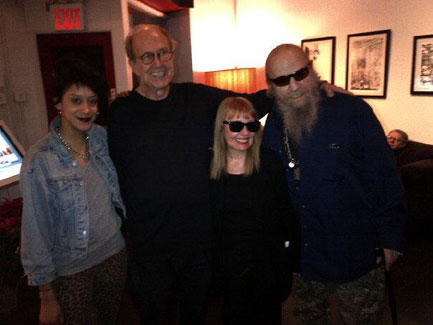 16 December 2012: Warhol stars Bibbe Hansen and Billy Name joined playwright Robert Heide and actress Jocelyn Saldana at the party last night at the Gershwin - see invite below. Saldana played the part of Valerie Solanas in Scum With Me - an adaptation of Solanas' Scum Manifesto - that was performed at the Gershwin on the 6th.

Among the highlights of the party was a showing of Danny Williams' film of Robert Heide's play The Bed. The Bed was first performed at a benefit for the Caffe Cino on April 26, 1965 at the Sullivan Street Playhouse when the Cino had closed temporarily due to a fire. It was later performed for a full run at the re-opened Caffe in July 1965 with a revival the following September. The Bed was also the producing debut of Ron Link who would go on to produce Glamour, Glory and Gold by Warhol star Jackie Curtis and Women Behind Bars starring John Water's transvestite superstar, Divine. See Caffe Cino.

The director of the film version of The Bed, Danny Williams, is presumed to have committed suicide in September 1966. He was Andy Warhol's lover for a short period during the '60s and the subject of Esther Robinson's excellent film A Walk into the Sea: Danny Williams and the Warhol Factory. The party's theme was "Christmas with Andy" and was held to celebrate the closing night of the Gershwin Hotel which has hosted a large number of Warhol-related events over the years. 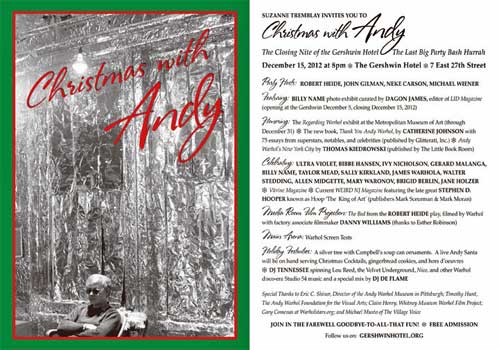 Flyer for the Warhol party at the Gershwin (click to enlarge)

The Gershwin Hotel in New York is closing and a farewell "Christmas with Andy" party is being held there on 15 December. Details on flyer above (click to enlarge).

A two month retrospective of the films of Jonas Mekas by the British Film Institute begins in December 2012 in conjunction with an exhibition at the Serpentine Gallery that opens on 5 December. Mekas will be giving a talk at the BFI Southbank on 6 December. He will also be hosting a "Jonas Mekas and Friends" event on 12 December which is now sold out. A Saturday seminar, The Jonas Mekas Diary Film Project, which will take place on 8 December at the Serpentine Gallery is also sold out. (There will also be screenings of his films at the Pompidou centre in Paris - as part of their Mekas-Guerin series which began 30 November.)

Details of the Mekas exhibition at the Serpentine Gallery here. 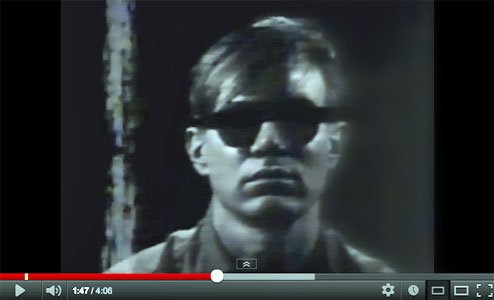 Site-user Pedro Modesto in Rio has brought to my attention the fact that a Screen Test of Andy Warhol may have been included in a promo video for Nico's Frozen Warnings, co-produced by Gerard Malanga and Steven Seymour in 1969. The video can be seen on You Tube here. The Screen Test footage begins at about 1:44.

In the film catalogue raisonné the Screen Test is listed as ST349 and it is noted that "it's current location is uncertain." No mention is made of the promo video. The original footage is, presumably, still missing.

At least one Screen Test of Andy Warhol does seem to have existed, although its current location is uncertain. A Warhol Screen Test was first mentioned in print in May 1966, when it was screened during a performance of Screen Test Poems (ST372) at Cornell University, when various Screen Tests, credited as 'films by Andy Warhol,' were projected behind readings of poems of Gerard Malanga.

Reva Wolf has written extensively on Warhol's collaborations with Malanga and also on their 1967 book, Screen Tests/A Diary... in which images from Warhol Screen Tests of fifty-four different people were published opposite poems by Gerard Malanga. Wolf noted that although Warhol does not appear in the published version of ScreenTests/A Diary, Warhol's name was included in an early version of the manuscript, with his Screen Test listed in the table of contents as number forty-four...

A three-frame film image of Warhol that certainly looks very much like a Screen Test appears in a Malanga publication from 2001, where it is identified in the caption as 'From Andy Warhol: Portraits of the Artist as a Young Man, a film by Gerard Malanga, 1964-65'... (AD206)

The image reproduced in the cat. rais. of the missing Andy Warhol Screen Test (ST349) matches the image of Warhol in the Elektra music promo for Nico's Frozen Warnings above.

Leee Black Childers exhibition at the Vinyl Factory in London 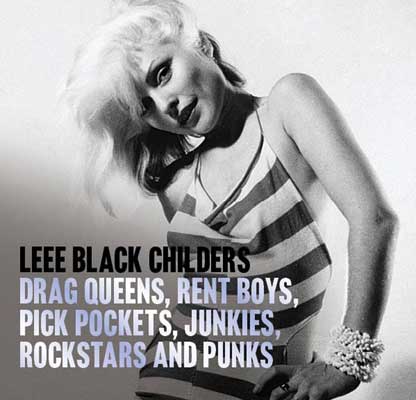 An exhibition of the photography of Leee Black Childers opens at The Vinyl Factory Chelsea Gallery in London on 6 December to coincide with the publication of his first book, Drag Queens, Rent Boys, Pick Pockets, Junkies, Rockstars and Punks.

An interview with Childers when he was in London last year can be found on YouTube here. 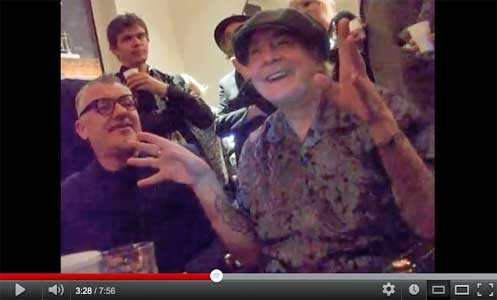 You Tube interview with Leee Black Childers in London in 2011

A missing version of Bike Boy? 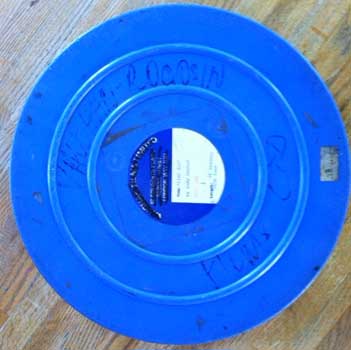 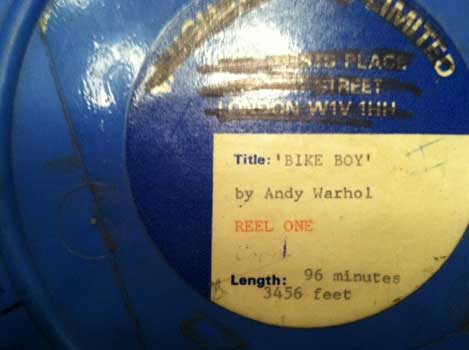 A site user from the U.S. may have found a missing version of Warhol's film Bike Boy - or at least the first reel of the missing edit. The length of the film is listed as 96 minutes on the film canister whereas the preserved version of the film lasts 109 minutes. A missing 95 minute version was mentioned in The Films of Andy Warhol Part II by Callie Angell who noted that "no print of the earlier 1967 version has been found."

The first 95-minute version of Bike Boy opened at the Hudson Theater near Times Square in October 1967, following a six-week run of I, a Man, and received a pan from The New York Times: '[Bike Boy] opened yesterday at the Hudson Theater. It belongs in the Hudson River.' James Stoller, who wrote a more enthusiastic review in The Village Voice, noted that he had seen two different versions of the film, one without the shower scene, on two different nights; apparently Bike Boy was still being edited while it was showing at the theater. On November 1, as Bike Boy began its fourth week at the Hudson, Warhol appeared at the theater to conduct a midnight symposium entitled 'Pornography or Reality'...

The uncut, full-length reels shot for Bike Boy were included in the December 15-16, 1967, 25-hour screening of ★★★★ (Four Stars). In the spring of 1968, these original reels from ★★★★ were themselves cut into a second, longer version of Bike Boy, which opened in July 1968 at the New Andy Warhol Garrick Theater on a double bill with The Nude Restaurant. This preserved version of Bike Boy was made from the original materials, and thus represents the longer 1968 version: no print of the earlier 1967 version has been found. (FAW33)

An exhibition of more than 150 artworks inspired by Andy Warhol opened during the first weekend of December 2012 at the Hull Maritime Museum. The Warhol-inspired works of art are all by youngsters under the age of 16. In September 2012 a call was put out for submissions to the annual Junior Exhibition which this year was for works inspired by Warhol.