Events that took place at the Cinematheque on Wooster Street during the first half of 1968 included live performances. According to the chronology in Critical Mass: Happenings, Fluxus, Performance, Intermedia and Rutgers University 1958-1972, Herman Nitsch presented his Orgies-Mysteries Theatre (Actions 25 & 26) on 2 and 16 March. The production included Bibbe Hansen's father, the Fluxus artist Al Hansen, Jon Hendricks and Raphael Ortiz. (GH191) According to Roslyn Bernstein and Shael Shapiro in Illegal Living: 80 Wooster Street and the Evolution of Soho, Nitsch gave three performances in March at the Cinematheque.

"When asked what events they remember from the Cinematheque, virtually everyone who was there (and some who were not), mentions Hermann Nitsch's butchering performance on view March 2, 16 and 17. Standing in front of a pile of sheep guts and animal organs, before the stunned eyes of a full house, Nitsch and other performers dived into the bloody mess. At one point, Jon Hendricks stuffed bloody brains into his pants and pulled them out again through his zipper. A 19-year old girl in a white dress lies down under a dangling bloody sheep and bloddy and wet intestines were placed on her private parts. Hendricks says that the performance was 'very cathartic.'" (RB95-96)

In April 1968, Richard Foreman's Ontological-Hysteric theatre group presented Angel Face. Although Wooster Street historians, Roslyn Bernstein and Shael Shapiro, give the impression that Foreman gave his first performance at the Cinematheque after it was closed down, Foreman's first production was in April which was prior to the Cinematheque's closure in late July.

"When Cinematheque was closed down in mid-1968, Richard Foreman saw an opportunity. He asked Mekas for use of the vacant theater to rehearse and perform his plays. Mekas agreed, charging him no rent. Foreman opened his Ontological-Hysteric Theater with the premiere of his second play Angelface. It was held in Cinematheque at 80 Wooster Street, for four nights, April 9, 10, 11 and 14, 1968 before a slender audience of 10 to 20 people, some of whom walked out during the performance. This was the first Foreman play to be produced. To Foreman, the downtown venue, however unfinished, was a welcome and friendly space." (RB92)

On 5 May 1968, Philip Glass and Steve Reich performed at the Cinematheque. (RB97)

"It was the first public concert of Philip Glass's new music, performed at Cinematheque in spring 1968. On the program were two of Glass's pieces, Music in the Shape of a Square for Two Flutes, performed by Philip Glass and Jon Gibson, Strung Out, performed by the violoinist Pixley-Rothschild, and Four Organs composed by Steve Reich, with Philip Glass, Arthur Murphy, Steve Chambers and Reich on the electric organ and with Jon Gibson playing the maracas. The avant-garde space was the perfect setting for this unconventional performance in which the Glass musical scores were tacked up on the wall and the performers were required to move while playing." (RB98)

Mekas was still advertising screenings at Wooster Street in early July 1968 (see below) but by the end of the month the Building Department would close the Wooster Street venue. 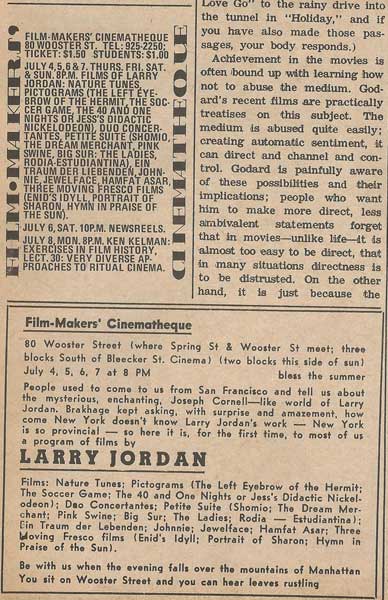 The Wooster Street Cinematheque was closed down in late July 1968, about seven months after it had opened. In his round up of the year published in the 26 December 1968 issue of the Village Voice, Mekas wrote about July 1968: "New York police and the Building Department close the Film-Makers' Cinematheque and inaugurate a long slump in the New York avant-garde film viewing. For the rest of the year, it becomes impossible to see independently made films on any regular basis." (JM327) Mekas notes in "Showcases I Ran in the Sixties" that Wooster Street was used for screenings from "early 1968 to 30 July 1968" and was "closed by the police and Building Department 'to complete the licensing' of the theater." (DJ324)

Eventually, the FDC screenings at the 41st Theater (which, as we have already seen, had been renamed the 42nd Street Theater before becoming the New Cinema Playhouse) also ended. David E. James notes that "a combination of factors, including Warhol's decision to distribute his own work, the increasing appropriation of underground devices and subject matter by commercial films, and disapproval and factionalism with the purist wing of the avant-garde, confounded the project. He managed to reopen it in 1968, in what he hoped would be a permanent location in an artists' cooperative building at 80 Wooster Street. Police harassment ended these hopes, forcing it to temporary homes at the Methodist Church on West Fourth Street, the Bleecker Street Cinema, the Elgin, the Gotham Art; even the Gallery of Modern Art kept the cinematheque alive for a while. But when the Film-Makers' Distribution Center was forced to close, leaving Mekas personally liable for eighty thousand dollars in debts, the cinematheque ended too." (DJ12) (It's worth noting that the Gallery of Modern Art had nothing to do with the Museum of Modern Art. It was a private gallery owned by Huntington Hartford, as is shown below.)

Although the Film-Makers' Distribution Center had originally released Warhol's **** (Four Stars) and The Chelsea Girls, Warhol was increasingly using venues that were not associated with Mekas to show his films. During 1967 he screened a number of films at the Hudson Theater. My Hustler opened at the Hudson on 10 July 1967; I, A Man on 24 August and Bike Boy on 5 October 1967. (BCR/HTA/HT)During 1968 and 1969 Warhol used the New Andy Warhol Garrick Theater to show films such as Loves of Ondine (opened 1 August 1968); Flesh (opened September 1968); and Blue Movie (opened 21 July 1969). (FAW 31, 35, 37)

In "Showcases I Ran in the Sixties," in To Free the Cinema: Jonas Mekas &The New York Underground, Mekas names three venues used during 1968 after Wooster Street closed in July - the Methodist Church, the Bleecker St. Cinema and the Jewish Museum. He used the church for Monday only screenings from 1 to 25 August. The Bleecker Street Cinema was apparently used only on 25 August. Tuesday night screenings at the Jewish Museum began on 12 November 1968.

In his January 2, 1969 column, Mekas noted "The Cinematheque is still closed. The New York police still hold two screens, two projectors, one totally innocent film by Andy Warhol, and one totally innocent film by Jack Smith (not Flaming Creatures) that they seized almost four years ago and, mind, there was never a charge against these two films. But to get it all back from the police, the Cinematheque would have to sue the police and we have figured out that it would cost us more to sue the police than to buy two new projectors, two new screens, and to make two brand new films. That's justice for you. Fuck New York justice." (JM330)

In the same issue of the Voice in which Mekas lamented that the Cinematheque was still closed, there was an ad for a Film-Makers' Cinematheque screening at the Jewish Museum: 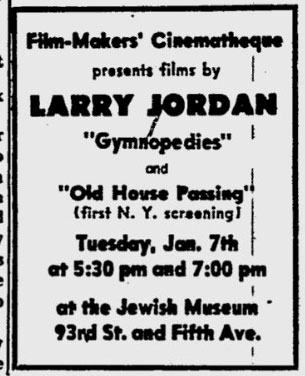 The Jewish Museum, the Elgin Theatre and the Gotham Art Theater

During 1969 Mekas' Mekas advertised Cinematheque screenings at three venues in the Voice -The Jewish Museum, the Elgin Theater, the Gotham Art Theater and the Gallery of Modern Art. 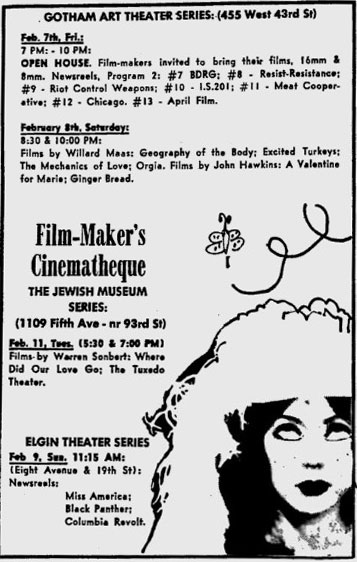 He noted some of the Cinematheque screenings in his round-up of the year, published in the 1 January 1970 issue of the Village Voice, 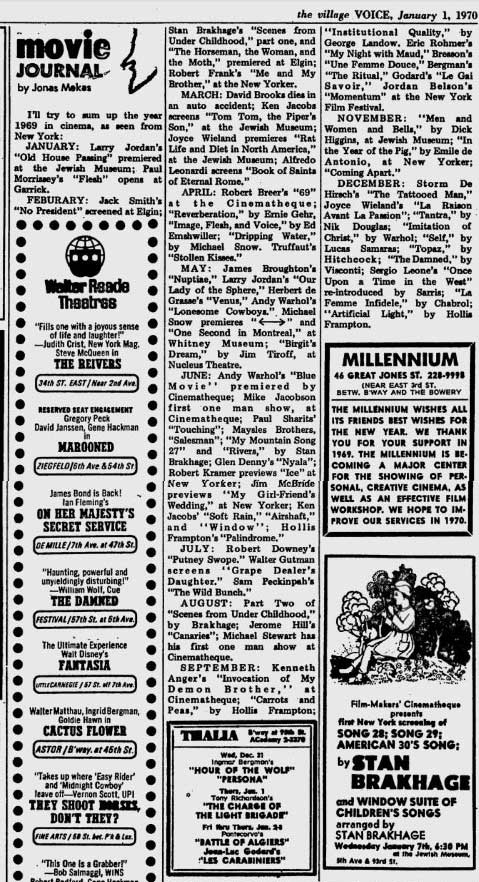 Although Mekas identifies some of the screenings in his column as Cinematheque screenings, many of the other screenings he mentions were also originally advertised under the heading of "Film-Makers' Cinematheque." For instance, in the January section of his column he writes "Larry Jordan's Old House Passing premiered at the Jewish Museum." But we know from the ad reproduced above, from the 2 January 1969 issue of the Voice, that the Jordan screening was a presentation of the Film-Makers' Cinematheque but this was not mentioned by Mekas in his column.

In the February section he mentions films by Stan Brakhage premiering at the Elgin. As with the Larry Jordan screening, the original ad that included the screening was headed "Film-Makers' Cinematheque." 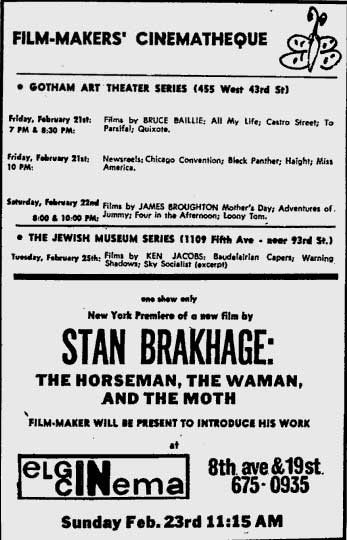 The Elgin Theater is listed as item 17:

The Gallery of Modern Art

During at least part of this time, he was running a series of "Cinematheque in Exile" screenings at the Gallery of Modern Art at 2 Columbus Circle. As noted earlier, the gallery had nothing to do with the Museum of Modern Art. It was a private gallery owned by the philanthropist Huntington Hartford. The screenings at the gallery are the last ones listed by Mekas in "Showcases I Ran in the Sixties:"

"18. Gallery of Modern Art, Columbus Circle, 1 March to September 1969. Daily screenings (except Monday and Tuesday). Screenings stopped by me after a show of Stan Brakhage's Window Water Baby Moving, which the management of the gallery found obscene." (DJ324)

The first screenings at the gallery were listed in a "Film-Makers' Cinematheque in Exile" ad in the February 27th issue of the Voice: 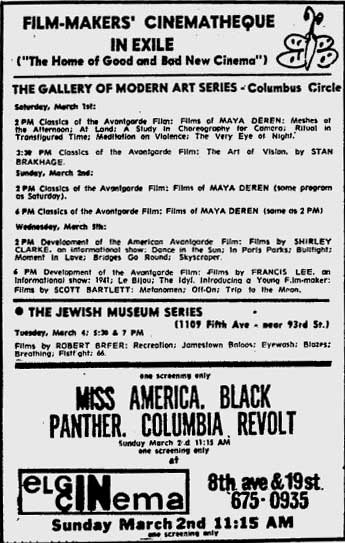 Although Mekas writes in his chronology that the screenings at the Gallery of Modern Art lasted until September 1969, I have been unable to find ads for screenings at the gallery after May 1969. Mekas says he left the gallery because they found a Brakhage film "obscene." At the bottom of an ad from the 1 May 1969 issue of the Voice, he expresses his concern about the fact that the venue stopped the premiere of a Brakhage film, but doesn't indicate the title of the film. 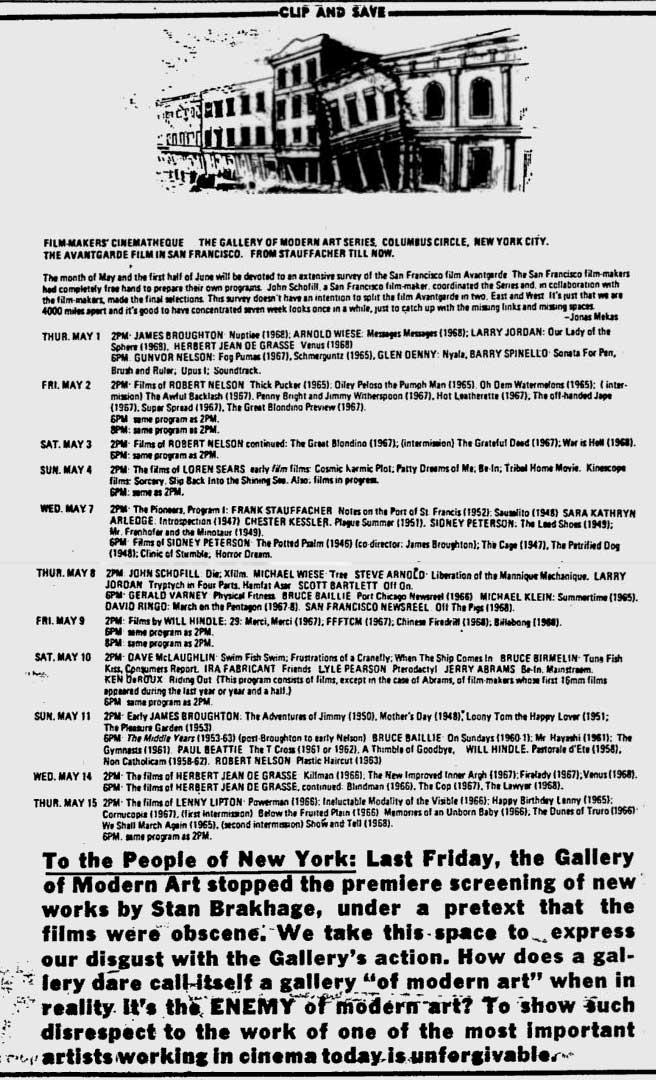 The last ad that I found in the Voice for the screenings at the Gallery of Modern Art was in the 29 May issue which ended with the showing on June 1st of two films by Max Katz. On 16 March, the New York Times reported that 2 Columbus Circle was "up for grabs" and on the 16 July it reported that "Huntington Hartford's Museum is Given to Fairleigh Dickenson," with the new building to be called the New York Cultural Center.

The first issue of the Voice after 29 May was the 5 June issue. There is no mention of the Gallery. Instead there is a Film-Makers' Cinematheque ad for films by Mike Jacobson at the Jewish Museum and the premiere of "a new film by Andy Warhol" at the Elgin Theater. 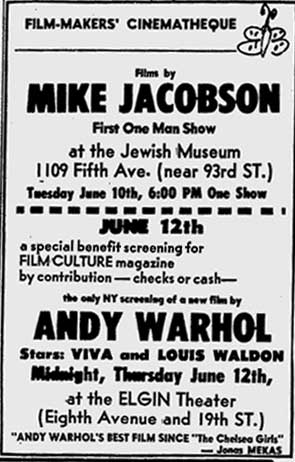 The film was actually Blue Movie which, according to the ad, was being screened as a benefit for Film Culture magazine. The title of the film was left off the ad, possibly so as not to attract the attention of the censors. According to Popism the original title of the film was Fuck, but even the title of Blue Movie might have attracted attention that Mekas would have rather avoided. (POP294) Mekas quotes himself in the ad which he presumably paid for as the person behind the Film-makers' Cinematheque and does not mention that he is the publisher and editor of Film Culture.

Blue Movie was eventually seized at a screening for being pornographic, but not until about a month and a half later - on 31 July - by which time it was playing at the Andy Warhol Garrick Theatre.

Blue Movie was ruled obscene on 18 September and the theatre manager fined $250.00.

Although Blue Movie had been included in a Cinematheque ad, Warhol was distributing most of his own films by 1969. When Jonas Mekas was asked by Vincent Canby in an interview that appeared in the 24 May 1969 issue of The Morning Record, "Whom do you regard as the underground's most important filmmakers today," Mekas replied, "Andy Warhol, of course, even though he now is distribution most of his films himself..."

Other Cinematheque screenings at the Elgin included Kenneth Anger films in September:

At the end of year, Mekas put on a film festival at the Elgin "arranged by Film-Makers' Cinematheque." He mentions some of the films in his January 1st column - such as Warhol's Imitation of Christ - but not where they were screened or that the screenings had to do with the Cinematheque (i.e. with him).