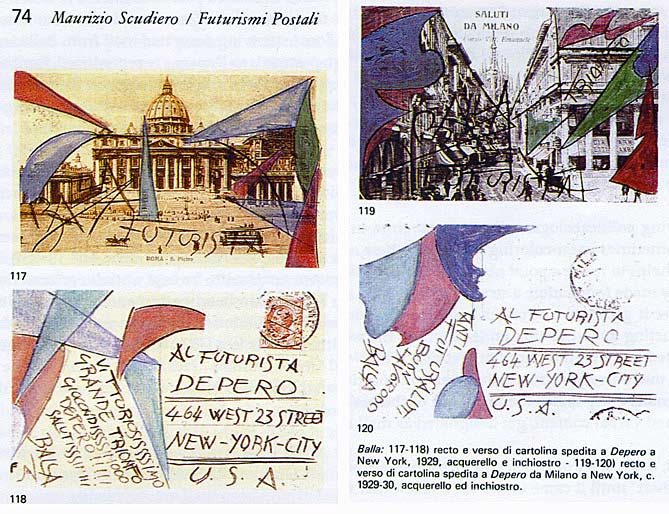 Two blocks south of my house on 25th Street, at 464 West 23rd Street, stands a bleak building, its original façade and upstairs entry-way demolished for profit from rental space. The building lost all decorum when this 19th century private house became an apartment building, making no claim to shelter the souls within it. During the prelude and first act of the Depression, an Italian artist, Fortunato Depero (1892-1960), occupied a studio in the building. He received decorated postcards mailed to him from Italia by Giacomo Balla (1871 - 1958). Balla did not address the postcards to Fortunato Depero, but in a Futurist truancy from conventions, "...Al Futurista Depero." Some surviving decorated mail from Balla is pictured in a book, Futurismi Postali, 1968, Longo Editore. Two postcards to Depero are reproduced, front and back, showing Balla introducing speedy angles and a few profiled faces into the images on the cards. A stamp has been removed from one, perhaps to be added to a collection of foreign stamps, suggesting that the hand-decorated card was appreciated less than a mass-produced ready-made postage-stamp.

The address on West 23rd Street forges a link between mail-art in Italy and in Manhattan, enhancing the dream-history of 23rd Street. Dylan Thomas was said to have drunk his way from bar to bar across 23rd Street, West to East and back, at a time of many more bars. The Chelsea Hotel attracted artists, many of them receiving and sending mail-art (Christo and Jeanne-Claude; Daniel Spoerri). May Wilson moved into the Chelsea Hotel in June, 1966, and then into a studio apartment next door, 208 West 23rd Street. Although John Willenbecher received mail at an uptown apartment, he kept a studio around the corner on 7th Avenue, and visited May Wilson frequently. Rather than hand correspondence to each other he and May relayed Johnsonian as they were instructed to, in addition to their own exchange of variegated mail independent of Ray Johnson. Andy Warhol's film, The Chelsea Girls, acknowledged outrageousness in the midst of low-rent neighborhoods of Irish and Greek families. Jackie Curtiss and Valerie Solanas were often seen patrolling, and trolling the block with Chelsea Hotel on one side and the Y.M.C.A. on the other.

Mail-artists in 2006 might well pause for a moment at 464 West 23rd Street to reflect on the history and geography of mail-art, acknowledging the mail-art which Giacomo Balla addressed to Manhattan. Mail-art around 1930 was nothing new. Mail in some sense had always been mail-art, expressing visual meanings in addition to explicit verbal messages. In the 19th century, the first printed stamps were designed with an expressive aesthetic quality, and the deployment of a stamp on a card or envelope could be part of a satisfying design. Myriad artists drew on envelopes and cards, as when Picasso sketched and resketched to prepare one postcard as a mute message for one woman. By 1929 - 1931, when Depero lived in New York, artist had long subverted the self-important postal system with mischief and aesthetic expression. Throughout, the function of the avant-garde has been to get out in front of a system which might close down over itself and anyone caught within it, and so they have used their art to keep the postal system an open system. They have used decorations to do what decorations do, which is to give visual testimony that a soul, or at least a mind or an imagination, will not be subordinated to a rationalized system.

During the Civil War, envelopes became vehicles carrying political slogans. At the same time, in France, many painters were already sketching on envelopes, sometimes water-coloring images. If these activities are deemed mail-art, then that title is retroactive, and helps to make a point about the way the history of art works. A movement in art is not founded on a ready-made foundation: a structure builds and rebuilds its foundation as it develops. The larger and stronger it grows, the stronger and larger becomes the foundation. The Hong Kong Airport has been constructing its foundation under itself, as the weight of its building has settled an island which was constructed as its preliminary foundation. the New York Correspondence School inadvertently constructed its own history , retrospectively and retroactively, by calling attention to the expressive possibilities of the mail. Only under the influence of the N.Y.C.S. did earlier decorated cards, or envelopes with both visual and verbal content, get designated as mail-art.

No one fathered mail-art, and no one founded mail-art, the history of which will be as mail-art becomes. Early aestheticized mail could not be classified as "mail-art" until it came under the shadow that was cast back upon it by a network of mail-art. Now, the mail-art of next week will be in a position to construct its origins, retrospectively. Certainly Ray Johnson was never the father or founder of mail-art. However, by asking a recipient to mail a paper object to someone else, he did start a network, which soon became a self-constructing information system which, as it enlarged and continued to develop, widened its future and deepened its past. Earlier envelopes and cards became its foundation later. Now that other structures have been built on Ray's network, it belongs to the history of networks, not to the history of all mail-art.

The network took enormous energy to set in motion. Sometime, perhaps by 1961, Ray began to write "Please send to..." on pieces of paper he mailed as cards or as the contents of envelopes. The earliest I understood, remembered, and consciously acknowledged was mail sent by Ray Johnson to May Wilson to give to her identical twin granddaughters, Kate and Ara Wilson, in July, 1962. By September, I was mailing envelopes from large boxes of envelopes Ray handed over, and delivering more boxes to May Wilson in Phoenix, Maryland, and to Helen Jacobson in Pepple Court, near Baltimore. At the same time, Marie Tavroges (Stilkind) was mailing envelopes from her office at Julliard School. The envelopes usually contained instructions to mail the contents to another person.

The relay of cards and envelopes was the beginning of a network set in motion by Ray Johnson. The network was soon named the New York Correspondence School of Art by Ed Plunkett, reflecting both the New York School of Abstract-Expressionist painters, and the fact that May Wilson had studied both the studio practice of art and the history of art by correspondence courses. She was a suburban housewife and grandmother who answered advertisements in order to learn to paint by mail. Without her cooperation, Ray could not have interwoven his network of correspondences. That she lived until 1966 on "Dance Mill Road" was one of the examples of "dance" that enhanced his spelling, Correspondance.

Ray Johnson encouraged such lateral moves in art as a gift from a person to a person, rather than art as individual transcendence, consistent with aspirations toward fame and money. In his experience, as I witnessed it, the beautiful was that which made him desire to conceive something with it. He mailed suggestive images on paper to other people, hoping that they would accept an invitation to construct something never seen before, and would conceive something that could be given to someone else. Now in 2006, any mail-art that builds its structure on Ray's network secures his network in its foundation, where it hums away like the conscience of mail-art. Ray understood that his network was a process, never a product that he possessed because he had fathered it. Let it be said, that if Ray Johnson fathered anything, he fathered nothing.