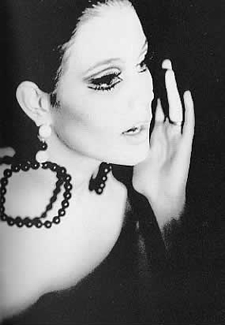 Susan Bottomly came from an old New England family, attending boarding school where she was thrown out four times. (VY107) Her father was a district attorney in Boston. (POP175) In 1966, at the age of 16 she met Andy Warhol at a party in Boston - the same year that her modelling career took off with a front cover for Mademoiselle magazine.

"There were other girls who were just as beautiful as Susan Bottomly was, but her way of moving made her extra beautiful. People constantly wanted to know, 'Who is she?' ... She also had one of the few bodies that could really bring out the ultimate look in a dress like, say, the ones Paco Rabanne made out of plastic disks or like the short black 'discotheque dress.' And with her long neck, she could wear the new big earrings the way nobody else could... Susan would "spend hours putting on the latest makeup, stroking on Fabulash over and over again, painting her eyes three different shades of brown... Watching someone like Susan Bottomly, who had such perfect, full, fine features, doing all this on her face was like watching a beautiful statue painting itself." (POP175-6)

Bottomly moved to New York in the summer of 1966 and went straight to the Factory. (VY107). She lived at the Chelsea Hotel where her rent was paid by her family who also sent her an allowance. Gerard Malanga lived with her in the Chelsea for the first couple of months, writing poems about her. (POP175-6)

With Warhol's relationship with Edie falling apart because of her drug use and alliance with the Dylan crowd,, Andy began hanging out at places with Susan. According to Victor Bockris in his Warhol biography, Andy was "playing her [Susan] off against the others while Susan, who had an allowance from her daddy, picked up the tabs at discotheques and introduced him [Andy] to potential backers." (L&D260-61)

The "Hanoi Hanna" segment was filmed in Velvet's room at the Chelsea. According to Mary Woronov, who played the part of Hanoi, "Velvet was a slob." She "was a society girl from Boston hoping to follow in Edie Sedgwick's footsteps." Mary was "stoned to the gills" for the filming and, according to Mary, Velvet was drunk, slugging "out of her vodka bottle, a little too greedily for a girl of good breeding", and "Ingrid Superstar was on pills, but they had no effect, she was naturally nuts..." Mary watched Velvet applying her make-up and whispered to her: "No matter how much you put on your face, it won't make your butt any smaller." (MW33-4)

During the filming of the scene, Velvet was expecting a phone call from a modeling agency and warned Andy that if the phone rang during the filming, she would have to answer it. But when the phone did ring, Mary pulled it out of her reach, not allowing her to answer it. Velvet asked Mary to let her answer the phone, saying "you promised" and "that's my call" but Mary replied: "You don't have a call. You have a fat ass." The end result was that Velvet ran out of the room in anger - although she did return to finish the scene. (MW41)

Ronald Tavel who wrote the script for the Hanoi Hanna segment was so pleased with Mary's performance that he offered her a part in an Off-Off Broadway play three days later.

Susan Bottomly also remembers doing a film at some point where "I sit there and put on make-up and talk to my boyfriend, David Croland." (VY108)

By Autumn of 1966, Susan had broken up with Gerard and and started seeing David Croland who would later become well-known as a fashion illustrator. Susan met David at a party at Il Mio she attended with Andy. The party was arranged to promote big earrings that David had designed for Paraphernalia. When Susan saw David, she asked her Cambridge roomate who was also there, to get him. When David came over to them he picked out two crystal drops with the chains attached from the low chandeliers at Il Mio and made them into earrings which he gave to Susan.

After the Paraphernalia party, they all went to another party in an apartment on Fifth Avenue where Susan and David locked themselves into the bathroom. When the other party-goers asked them what they had been doing for so long in the bathroom, Susan replied "Fucking".

David thought the impromptu earrings made for Susan looked so good that he decided to include them in his line at Paraphernalia, which meant stealing more crystals. According to Andy, "after a couple of months, the chandeliers at Il Mio were looking pretty bleak." (POP176-8)

A few days after they met, David and Susan were amongst the Factory regulars who accompanied Andy to Provincetown where the Velvets were playing at the Chrysler Museum.

David and Susan got lost from us at one point and decided to move to a hotel. 'Susan had the money and the checkbook,' he [David] told me a long time later, 'so we had to register as Mr. and Mrs. Bottomly, and that' he laughed, 'is how the whole problem got started.' When I asked him what he meant, he smiled and said, 'Oh, come on, you remember what a joke I was in those days, tagging along with Susan to all her modeling jobs, carrying her portfolio, hoping someone would point to me and say, 'Oh, why don't you get into this shot, too?' I wanted to be a model then, but what I didn't realize was that I was trying to be a female model. (POP179/180)

In January of 1967, Warhol shot some footage of Susan Bottomly for **** (Four Stars) - a 30 minute colour and sound segment referred to simply as International Velvet which also included Alan Midgette and Dickin. **** (Four Stars), was composed of footage shot between August 1966 and September 1967. It was only screened once at the New Cinema Playhouse in New York from 8:30 pm on December 15 to 9:30 pm on December 16, 1967.

Debra Miller in Billy Name Stills from the Warhol Films:

Immediately following the unique initial showing, the twenty-five-hour movie [**** (Four Stars)] was replaced by a condensed two-hour version. Several of the episodes were relegated to storage (for example, Philadelphia Story); others were shortened and released in a more marketable form (such as Imitation of Christ...); and still others were integrated into different Warhol movies (for example, a reel featuring Waldo Diaz Balart in The Loves of Ondine...). (BN86)

In addition to her Warhol films, Susan Bottomly was also one of the Factory regulars who appeared in the party scene of Midnight Cowboy which was filmed in late June 1968 while Andy was recuperating in hospital.

Susan and David Croland split up in 1968 after Warhol's group introduced Bottomly to French matinee idol Christian Marquand, who had gone on to direct films. He cast Susan in in a small part in the film version of Terry Southern's Candy. In the film, she ran down a street shouting "Candy! Your forgot the shoe!" After filming it in the USA, Christian flew Susan to Italy to do something with the Living Theatre and she ended up staying in Italy for months. (POP270)

She arrived back from Rome the day before Andy was shot. She went to David's house to tell him that she was leaving him permanently, and while she was there, Nico came over and told them that Warhol had been shot. Unable to get any information from the hospital and not knowing what to do, Nico suggested that they light candles and sit on the floor and wait. Hours later, after Nico left, they found out from the hospital that Warhol's condition had improved. A few hours after that, Susan left as well, ending her relationship with David. (POP283)

I wanted as much attention as I could possibly get... But I had no idea how to handle the attention. I was very clumsy. I would drink too much, often. I had no idea what I was doing... I remember having a few twangs about the fact that Viva was becoming more important than I was. On the other hand I knew it was time for me to move on... (VY108)