The Holman and Ethel Johnson Center for the Arts in Troy, Alabama will be celebrating their grand opening on September 14, 2008 with an exhibition of Warhol prints on loan from The Warhol Museum. The exhibition will continue until November 15, 2008. 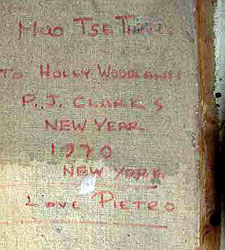 I was recently sent by a site-user ("Tuscan Tony") a photograph of a painting he had acquired by "Pietro Psaier." On the back of the painting was the inscription, "To Holly Woodlawn, P.J. Clarke's New Year 1970 New York Love Pietro." The front of the painting features an image of a man's face (Mao?) with the words "Le Journal de Shanghai" and some Chinese lettering.

Thinking that this might finally provide a link to Psaier and Warhol, I sent Holly, star of Trash and Women in Revolt, the photos of the painting and also a photograph of Psaier from a press release for an auction in September. On the press release it alleges "Psaier was best known for his Pop art and can be closely linked to Andy Warhol where he worked at his studio "The Factory" in New York often collaborating on pieces with Warhol."

Despite the fact that representatives of the Andy Warhol Museum and the Andy Warhol Foundation have denied finding any references to Psaier ever working with Warhol (see Times (London)), unauthenticated collaborative works by "Psaier" and Warhol have been shown in numerous exhibitions at museums and public galleries in Spain - including the Museu Provincial de Lugo (October 31 - December 8, 2003); El Museo de Belles Arts Gravina (c. late July - September 5, 2004); Arte Sevilla in Seville (January 14 - 17, 2005); the Sala Municipal de Exposiciones del Museu de Pasión in Valladolid (October 5 - November 5, 2006); the Institut d'Art Modern in Valencia (March 7 - May 20, 2007); and El Museo Verbum in Vigo (May 3 - June 30, 2007).

Some of the alleged collaborations of Psaier and Warhol are listed here.

I have yet to discover anyone who was associated with Warhol's Factory who remembers Psaier. In regard to the "Pietro Psaier" painting inscribed to Holly, she emailed me her reaction on August 18, 2008:

"I've never seen this painting in my entire life. I've heard of Peter the Great, but he's Russian. xHolly

ps - I have been high many times, but not that high. I would've remembered something that big."

"Tuscan Tony" is doing a blog about the painting here.

[Note: A site-user has also pointed out that P.J. Clarkes is misspelled on the painting.]

An exhibition of 70 silkscreen prints and lithographs by Andy Warhol is currently taking place at the Shanghai Sculpture Space - a renovated steel plant in China. Included in the exhibition is footage of Warhol's television intereviews. Wang Jie notes in the Shanghai Daily, "Warhol spent his entire life n the media limelight: he always wore a silver wig and always avoided voicing his opinion by using a lot of "uhs" or "greats" in his speech. His fascination with celebrity and stardom was unprecedented in the art world... He often insisted there was no meaning behind his work and refused to explain it."

Warhol's visit to China while he was alive was captured on film and released as Andy Warhol: Made in China. Christopher Makos accompanied Warhol on his China trip and documented it with photographs which were published this month as a book, Andy Warhol in China: The Photographs of Christopher Makos.

The Shanghai Daily article is at here.

The Shanghai Sculpture Space can be found at: here.

The exhibition continues until August 31, 2008.

Wild Raspberries at The Warhol 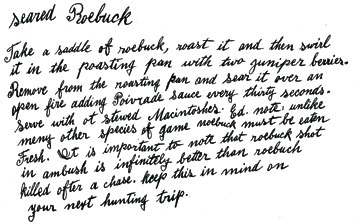 The show is a mini-history of fine dining beginning when America discoved European haute cuisine after the deprivations of World War II. Included are food-themed drawings, collages, a folding screen, photographs and paintings - including one made of chocolate.

Wild Raspberries was a self-published limited edition book by Andy Warhol and Suzie Frankfurt printed by Seymour Berlin. An exhibition of the same name took place at New York's Bodley Gallery December 1 - 24, 1959. Frankfurt's husband was Stephen O. Frankfurt, an art director at the advertising agency Young & Rubicam where Warhol worked on an advertising campaign for Modess during the same year that he and Suzie collaborated on their book of whimsical recipes. Suzie would later quip, ""The only reason Andy liked me was because I was raised in Malibu with movie stars like Myrna [Loy] all around." (See here)

Copies of the hand-coloured books, along with Warhol's original drawings and original typed recipes are also on display as part of the exhibition which continues until September 14, 2008.

Details on the exhibition here.

Dinner for Dickens is available here.

The Oregonian has published a review of the "Bande à Part" exhibition which features work by Billy Name, Godlis, Roberta Bayley, Danny Fields, Marcia Resnick and Anton Perich. You can read it here.

Mark Borkowski, previously PR to the likes of Joan Rivers and Michael Jackson, has worked out a "fame formula" which shows that people catapulted into fame are actually famous for fifteen months not fifteen minutes. The formula is: F(T) = B + P(1/10T+1/2Tsquared) where F = level of fame, T = Time (measured in three-monthly intervals ie T=1 is after three months and T = 2 after six months). B is the base level of fame quantified by analysing the average level of fame in the year before peak and P is the increment above the base level. Details here.

"Supernovas" continues at the Kymara

Robert Forster does The Velvets

Robert Forster is to perform the music of the Velvet Underground on September 13, 2008 in conjunction with the opening of the "Andy Warhol: Other Voices Other Rooms" exhibition at the Wexner Center in Ohio. Other events scheduled during the run of the exhibition include personal appearances by Vincent Fremont, Callie Angell, Mary Woronov and John Waters as well as "Drag Day" on October 5th and an Andyland party on November 8th.

(from the collection of Billy Name)

"Early on, I did an exhibition of Andy Warhol in my gallery... The boy is a very important artist, Andy, because he helped America. He mixes very much with youth, and with all the chic people - you know, the bums. When you have such a stupid expression as Andy has - when he is being silent, before the smile starts - when you look like that, you can do anything you want in the world. As Christ said to all those priests, 'Suffer the little children to come unto me,' and Warhol is a horrible child. He has helped America to get rid of its puritanism, either with his half-pornographic, half esthetic films or else with his portraits of the fake stars he has around him and the real stars he has always liked. He's an amazing person, and probably someday he will be considered a saint."
(See here)

"It's hard to get the whole point of Warhol. He had his fingers in so many pies that it was as if he had the career of six artists simultaneously. He was incredibly prescient, not least in the way we see celebrity; and the way the mass media affect our lives. God knows what he would have done with the internet - he was the first truly 21st century artist. There are problems with his legacy: some artists think that to be Warholian it is enough to hang out with or make work with famous people. But that was just one element of what he did. There was his collecting, filmmaking publishing, art making, hoarding and so on. It is one thing to change the art world - or the art market. It is another to change the world and how we place ourselves within it." (See here)