Bennard B. Perlman (college classmate of Warhol): The Warhola family originally lived at 73 Orr Street, in a wooden house in which they occupied just two rooms (it was there that Andy was born), then at 55 Beelen Street and 6 Moutrie Street. All were within a few blocks of each other in Pittsburgh’s Hill District overlooking the industrial complex, blast furnaces, and belching smoke of the Jones & Laughlin Steel Company. It was there that Andrej Warhola [Andy Warhol’s father] was employed. (BP147) 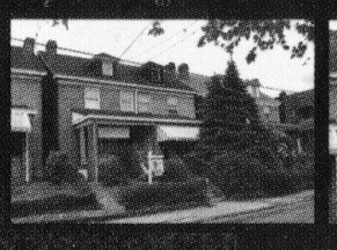 Bob Colacello: The Warhola house, 73 Orr Street, was a two-room tarpaper shack, squeezed into a row of two dozen just like it, facing a matching row across a muddy alley. There was no bathroom. ‘The commode,’ as Paul Warhola always refers to the toilet, ‘was in the center of the alley, where they had an outhouse.’ (BC15) 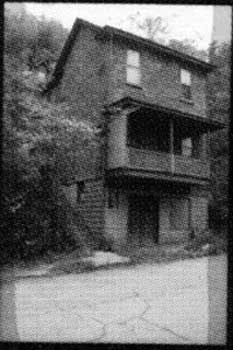 Bob Colacello: When Andy was two, the Warholas moved to a four-room apartment in a two-family house, around the corner on Beelen Street. ‘It was heated just by a pot-bellied stove,’ says Paul. ‘No bathroom, but it had a commode in the house.’ The landlord’s son, Chester Stanek, remembers Andy as a toddler. ‘He was a holy terror,’ Stanek says. ‘I’ll never forget the time we were standing on the front porch and he urinated on me…’ (BC15)

Paul Warhola: [After Beelen Street we moved to] Lower Moultrie, house no. 6... I lived there 1932-1934... Now, I'll tell you something I've never told anyone before. One time, when we were living in Lower Moultrie Street (I was ten), I went on the bus into town to do some chores. I went to help a guy in a drugstore and he always gave me 10 cents. Andrijk [Andy Warhol] he must have been 5 or 6 - ran out after me crying to the bus stop. I told him, 'Run along home and don't follow me.' But he wouldn't be put off; he tripped on the kerb by the bus stop, fell and broke his arm. Since Mom didn't have enough money for a doctor, we didn't take him to the hospital. The arm healed, but wrong. So then when the family came to us on a visit and saw Andy's arm was crooked, he had to go to the hospital where they broke his arm again and then put it in plaster properly. It was the wrist of his right hand, the one Andy painted with all his life. (RU56/77)

Bob Colacello: In 1934, with $3,200 Ondrej had hoarded dollar by dollar, the Warholas bought a house of their own, 3252 Dawson Street in middle-class Lower Oakland. (BC15)

John Warhola (Andy Warhol’s brother): I remember three houses like that before my dad bought his house on Dawson Street. First thing, Andy was six years old and he asked me ‘Is there a yard’ because we didn’t have no yard where we lived before. We lived in like two rooms with an outside toilet. Then he says ‘Is there a bathtub in our house?’ I said, ‘yeah, we’ve got a whole bathroom.’ He was real happy about it.  (RB)

Bennard B. Perlman (Warhol’s childhood friend: The Dawson Street home was a step up for the Warholas… And it was right across the street from Holmes Elementary School, where Andy was enrolled in the first grade in September 1934. (BP147)

Bob Colacello: The new brick-and-shingle house was larger but quarters were still cramped. The second floor of two bedrooms and a bathroom was rented out to boarders. Ondrej and Julia [Warhol’s parents] slept in the dining room on the first floor, which also had a living room and kitchen, and the three boys slept in the attic. The family bathroom was in the basement.

Andy’s father worked for the John Eichleay Company, a construction and house-moving concern. He was often away from home for weeks at a time, once for six months, working on job sites as far away as Cleveland and Hartford, Connecticut. In the early thirties, when the Depression hit hardest, he was also often out of work. (BC15)

Rainer Crone: Between 1929 and 1932 the available per capita income fell from $1,254 to $953 annually, while unemployment rose from 1.5 to 12.2 million. In 1933 one quarter of the available work force was unemployed, a total of thirteen million people, and by 1935 this figure was still 30 percent. Until the start of the Second World War employment figures remained fairly constant. (RCA9)

Bob Colacello: But the Warholas never went on home relief. ‘Dad was always too proud, ‘ says Paul. ‘And he was very thrifty. People made fun of him for saving.’ John Warhola recalls his father repairing the soles of their shoes with rubber from used tires. And both the oldest boys went to work at a very early age, first selling newspapers, then carrying coal and delivering ice.

Julia also pitched in, sometimes cleaning houses for a dollar day. She made flowers out of tin cans and peddled them door to door for a quarter apiece…. (BC15)

Paul Warhola: ... she [Julia Warhola] loved to sing. She had a wonderful voice. She also loved handiwork. She was always doing something. When she came to America she sewed curtains, knitted and embroidered. She would cut strips out of old tins and make artificial flowers out of them for ornaments. She then used to sell them for a few cents. I sometimes used to help her. (RU61)

Andy Warhol: Oh God, yes, it’s true, the tin flowers were made out of those fruit cans, that’s the reason why I did my first tin-can paintings… You take a tin-can, the bigger the tin-can the better, like the family size ones that peach halves come in, and I think you cut them with scissors. It’s very easy and you just make flowers out of them. My mother always had lots of cans around, including the soup cans. (FRP50)

Dave Hickey (art writer): His mother cleaned houses and washed clothes. She arranged artificial flowers in coffee cans, covered the cans with foil paper, and sold them door-to-door. She used her flower money to buy the Campbell’s Soup she served her sons for lunch. That soup, Andy told me once, constituted a rare opportunity as a child to exercise his taste, because he got to pick which kind of Campbell’s they would have for lunch. Usually, he said, he chose tomato. (PH009)

John Warhola: I still remember her [Julia Warhola] when we were small. We didn’t have no radio or TV to keep you quiet and in the winter she’d tell us to come in the kitchen and she’d say ‘alright somebody draw a picture of a cow,' you know, and then the one who draws the best picture will get a prize so what she did, she bought the Hershey bars for a nickel, real big, you know. Andy would always win. (RB)

Paul Warhola: It was a bad time. But even though we ourselves had almost nothing, mother always sent some of what she earned to her sister in Europe. It was sometimes only a dollar or two. She always posted a package back - a 'baliki.' (RU61)

John Warhola: When Andy was about eight he wanted a movie projector. My dad couldn’t afford to buy it so my mother would do some housework one or two days a week. I remember she got a dollar a day, and this projector was around ten dollars, so she saved the money up and got it for Andy. He’d buy a film of Mickey Mouse or something like that and show it on the wall over and over again. When a relative would give him a quarter he’d save it and then buy another film. That’s where some it it started – he really wanted to do some work with the camera. When he was about nine years old we had a Kodak Brownie camera… Andy would take pictures of just about anything. (BP148)

Matt Wrbican (Chief archivist at The Warhol museum): An area of the Warholas’ basement was cleared for use as a darkroom… After contracting rheumatic fever [in c. 1937], Andy was stricken with St. Vitus dance (Sydenham chorea) and confined to home for more than two months, during which his mother encouraged his interests in art, comics and movies. (MWC)

Paul Warhola: ...he stayed home for practically a year, having this St. Vitus Dance - you probably don't know much about it - where you twitch and you're restless. He also had scarlet fever which was very common in earlier days. And he stayed home. I was the eldest and mother figured I had to take care of some entertainment for him. So we bought a radio - it was our first radio - and back in about 1935 the only enterntainment we had was theatre. Andy was too young for that then, but spending days with him I did a lot of drawing and tracing. What do I mean by tracing? I used to get colour comics and rub them with wax, most likely from a candle and then turn them over and get a spoon and 'iron' them onto a clean piece of paper. Andy always showed a lot interest in that. And also in movie stars, from a young age. (RU52)

Paul Alexander (author of Death and Disaster: The Rise of Warhol's Empire and the Race for Andy's Millions): …At that time a patient normally suffered from the rheumatic fever until his immune system fought it off and he recovered. Since penicillin was not yet used to treat such diseases, the body had to repel the infection by itself. However, about 19 percent of the cases of rheumatic fever worsened and turned into chorea. Andy fell into that 10 percent. The sickness caused his skin to become spotty and brought on spells in which his arms and legs shook uncontrollably. Looking back on this time his life, Andy would refer to these episodes as his ‘nervous breakdowns.’ (PA22)

Matt Wrbican: As a preteen in the years 1938 – 1941, Warhol famously kept a scrapbook of photographs of the Hollywood stars who captured his imagination. (MW58)

Paul Warhola: I used to bring him a lot of magazines, a lot of movie star magazines. He was very fond of that. I used to have to send away and get him pictures of the movie stars. One special occasion I wrote to Shirley Temple and she sent him an 8 by 10 photograph of her and it had ‘to Andrew Warhola from Shirley Temple.’ (CR)