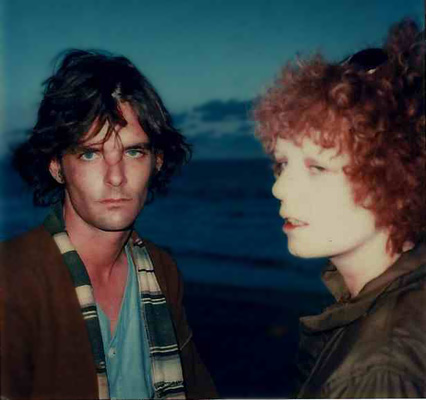 Patrick Tilden Close was born on June 1, 1948. Prior to starring in Andy Warhol's film Imitation of Christ as "the son" he worked as a child actor. His first documented role was in 1960 when he appeared as Franklin D. Roosevelt's son in the film Sunrise at Campobello. (The film was nominated for six academy awards.) Little is known about Close's life prior to his appearance in Imitation of Christ other than that he appeared in a number of television show episodes, including a main role in an episode of The Rifleman: 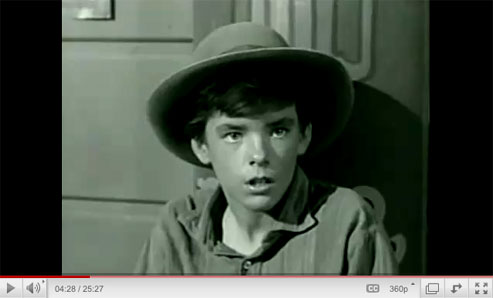 Patrick Tilden Close in The Rifleman (1961)

Other television roles included the following:

Butch in the "Character Building" episode of The Donna Reed Show

Joey McQueen in "Open House" broadcast as part of the General Electric Theatre on March 5, 1961

Noah Fergus in "The Queue" episode of The Rifleman (see above)

Freddy in the "Dennis Goes to Washington" episode of Just Dennis (an American television series based on the comic book character, Dennis the Menace)

Three years after appearing as a child in Just Dennis, Patrick was the subject of two Warhol Screen Tests (at the age of seventeen). 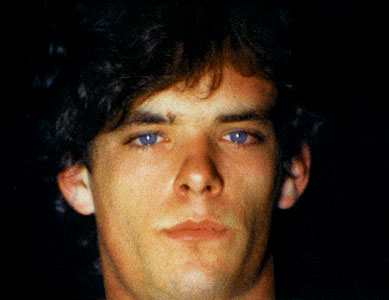 One of Patrick Tilden Close's Screen Tests for Andy Warhol

The Velvets were in L.A. (along with Warhol and his entourage) to perform at a nightclub called the Trip as part of Warhol's multimedia show, the Exploding Plastic Inevitable. The run at the Trip was originally scheduled to last for about two weeks but was cancelled early due to legal problems.

"These two color Screen Tests of Patrick Tilden-Close appear to have been shot and processed in Los Angeles; the return address written on both film boxes for 'Andy Warhol Films' is 2650 Glendower Avenue, the address of the Castle. Since both Screen Tests were shot on 1966 stock, it seems likely that these tests of Tilden-Close, were shot and processed in Los Angeles in May 1966, when Warhol, Paul Morrissey, the Velvet Underground, and other Factory personnel spent several weeks at the Castle waiting out the resolution of the Velvet's abortive booking a a Sunset Strip club called the Trip." (AD202)

Sterling Morrison, guitarist for the Velvet Underground, mentions Patrick in his description of what it was like at the Castle at the time.

"We [the Velvet Underground] had a horrible reputation. Everybody figured we were gay. They figured we must be, running around with Warhol and all those whips and stuff. One day Andy cooked eggs for everybody at the Castle. After about a week and a half waiting for the Trip to re-open I moved to the Tropicana [Hotel]. Los Feliz, the street that led to the Castle, was too far from the club scene on Sunset Strip. Faison and Danny were already there at the Tropicana and I had had enough of Patrick Tilden imitating Bob Dylan's grating speech patterns up at the Castle. There wasn't much partying at the Castle while we were there because of our reputation - rumours so sinister were making the rounds on the Strip that hardly anyone had the courage to visit. And those who dared come up at night found dark rooms and passageways, lit only by an occasional flickering brazier, strains of music from the acetates of the first album, mutterings, shufflings and an occasional human form, such as Severn Darden gliding by in his monk's attire. I do not exaggerate." (UT68)

In September 1967 Andy Warhol and Paul Morrissey returned to the Castle to shoot some scenes for Imitation of Christ. (AD202) It was around that time that Patrick Tilden-Close was romantically linked to Edie Sedgwick.

"After Dino [Valente], Edie was very much in love with Patrick Tilden. He was Bob Dylan's best friend. Bob had been staying at the Castle before the Velvet Underground moved there.

When Edie and Patrick fell in love, I thought it was a very romantic thing. She lived downstairs in Severn Darden's old room, the spookiest room of all. It was haunted. There was a pentangle in the entrance. I heard the shrieks and funny noises... I hear things rather than feel them. Every morning at four, at the same spot, somebody... the ghost... would make this noise like a broomstick pounding on the floor." (EDIE349)

Edie had been driven to L.A. by Sepp Donahower:

"It took like fifty-two hours or something, just straight through - zoom - either acid or black beauties. So we got back here [to Los Angeles], and I had this old converted restaurant I lived in called the Hideaway Cafe, almost really on the campus of USC. The place was all kind of tricked out, and Edie stayed there, I think, about maybe a month. Kind of got her health back 'cause we weren't into shooting speed and stuff. We'd get stoned, but we were more into, you know, smoking a lot of pot, psychedelics, mescaline, California drugs. So she sort of weaned herself... she was actually not taking anything. She got real sober... Anyway, then we got a call one day, some friends of hers had blown into town. Nico and some other people, and they were staying up at this infamous Castle, up in the hills of Los Feliz. Okay, so we trip up to the Castle, and there's a scene going on there. Usually stars, celebrities, musicians, actors, whoever was in town would stay at the Castle 'cause you were guaranteed a good time. Bob Dylan stayed there Andy stayed there...

So anyway, she fell back, kind of, with the New York crowd, and a lot of drugs, and so the New York drugs started up again... And then she said she wanted to go stay up there. So went up and got her crap, and I left her there and that was the last I ever saw of her." (GF161)

It was after leaving Sepp that Edie took up with Patrick Tilden-Close. (EDIE348) Sepp and Patrick also eventually became friends. Sepp later recalled "....I was very fond of Patrick....when he took up with Edie after we split, he somehow sought me out as a friend. I have a feeling Edie said some nice things to him about me as a person and as a friend....because, all of sudden...there he was! ...he was a nice bright person... just like Edie..." (S060311)

According to Callie Angell, Patrick "apparently returned to New York with Warhol and Morrissey to complete the film [Imitation of Christ] in November 1967." (AD202)

At some point after completing Imitation of Christ Patrick returned to Los Angeles where he stayed with his mother or occasionally with friends such as Susan Pile who had worked for Warhol from 1966 before eventually relocating to the L.A. area.

"We [Susan and Patrick] hung out together at various intervals throughout the 70s. He introduced me one Easter to the Hollywood Cemetery, and that transcendent experience became a photo essay in [Andy Warhol's] Interview [magazine] when I was West Coast editor. He took me to Severn Darden's house on Laurel Canyon in Studio City with a river running through the backyard. I remember dropping him off at his mother's apartment near the L.A. County Museum; he never had a car that I can recall. We fell out of touch and then reconnected a few years later... Patrick stayed with me for a while... We visited my friend Nancy and her new baby at the beach house in Malibu where that photo was taken [at the top of this page]. Somewhere in the neighborhood he caught up with Sally Grossman and introduced me to this icon of mine who was simply the coolest. I figured she would look after him now. He left his address book in my apartment. I didn't know where to find him so I kept it for safekeeping. Never saw him again but his presence is deeply felt in that priceless bit of ephemera." (S050311) 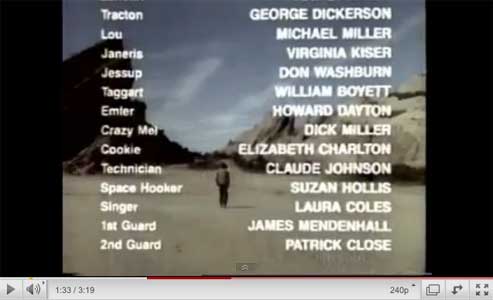 Patrick died in Hollywood, California on February 15, 1988, at the age of 39. The cause of death was fatty metamorphosis of the liver - a medical condition often associated with alcoholism or Reye's syndrome. Patrick's body was cremated and his ashes were scattered at sea.