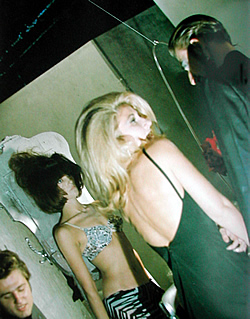 Diana Vreeland: "Jane Holzer is the most contemporary girl I know."

Although Popism refers to Naomi Levine as Warhol's "first female superstar," Baby Jane Holzer was the first of Warhol's superstars to attract a lot of media attention.

Jane Holzer was born Jane Brookenfeld on October 23, 1940 (imdb). Jane's father, Carl Brookenfeld, had made his fortune in real estate. Although Jane was raised in Florida, her father also had a place in New York where they spent a lot of time. Jane went to Cherry Lawn School in Darien, Connecticut and then to Finch Junior College until she was expelled, preferring dancing at El Morrocco to studying. After Finch, she started modeling and was catapulted to fame when David Bailey took her photographs for English Vogue in the summer of 1963. (KT165-6) Jane Brookenfeld became Jane Holzer when she married Leonard Holzer - the heir to a large real estate fortune. Their home in New York was a twelve room apartment on Park Avenue.

According to Jane, she was introduced to Warhol by Nicky Haslam who, at that time, was the editor for Show magazine. Jane thought that Nicky might have introduced her to Warhol on the corner of 59th Street, in front of Bloomingdales. According to Holzer, Warhol told her that he was making a movie called Soap Opera, and asked her if she would like to be in it. Shortly thereafter Jane had a dinner at her father-in-laws house on Park Avenue where she was staying and Warhol came to the dinner. Also at her dinner were David Bailey, Mick Jagger, Keith Richards, David McEwen and Nicky Haslam. (UW47)

In Popism, Andy Warhol recollected their meeting slightly differently, saying that the dinner came first, and that he then ran into her on Madison Avenue when she had just got back from "the big '63 summer in London when everything had really started to happen there." According to Warhol, "she couldn't stop raving about a club in Soho in back of Leicester Square, the Ad Lib, where the Beatles would walk by your table - the kind of place where, say Princess Margaret could come in and nobody would even bother to loook up, the beginning of the melting pot in class-conscious London." (POP59)

Jane was nicknamed "Baby Jane" by columnist Carol Bjorkman. The film, Whatever Happened to Baby Jane, had just come out and although the columnist had not seen the film, she used the name for Jane Holzer. Jane hadn't seen the film either, but when she did, she "wanted to die" but the name stuck. (UW47/48)

According to Jane, Soap Opera was the Warhol first film she worked on - with Jerry Benjamin and Sam Green. She also made a Screen Test where Warhol just turned on the camera and told her not to blink. She also remembered making a film where she was eating a banana, and then Batman Dracula. (UW47)

"That was hysterical. This limo came and picked us up and took us out to the Marshall Field house where Judy and Sam Peabody were spending the summer. And Andy's early star Naomi Levine was there. Ivy Nicholson was there too. And there were all of these wonderful proper maids in uniforms waiting on people. Naomi Levine wrapped herself in Saran Wrap with nothing underneath. Everyone was watching the maids sort of move around ill-at-ease, pretending that Naomi was dressed. Judy and Sam were hysterical, I thought it was hysterically funny - it was great." (Ibid)

Because of all the drugs and craziness at the Factory, Jane stayed away from it "between Edie's arrival and when Andy got shot" (UW53). She remained in contact with Warhol throughout the seventies and eighties, both often attending similar social functions.

"I remember it used to be so embarrassing in the '60s: he and ten people would show up and crash. By the '70s, he was the first one to be invited anywhere." (UW53)

Jane's decision to stay away from the Factory because of the drug taking there did not prevent her from appearing in one of the druggiest (non-Warhol) films of the period, Ciao Manhattan, starring Edie Sedgwick. "Speed" was the drug of choice for much of the cast/crew of the film which includes Brigid Berlin's famous monologue on the joys of amphetamine ("speed"):

If you can't get the pure crystal that looks like snow, if you can't take a sterling silver knife and light a match underneath it and get Rockefeller Center's ice skating rink on top of it, you're through." (Ciao! Manhattan DVD)

When later asked what it was like working with Edie Sedgwick and Chuck Wein on the film, Jane said "Let me give you an example. One day we went to this halfway house. And we were waiting for Edie to show up. We got there at probably 11 in the morning. At 5, Edie shows up... she filmed perfectly because she was, you know, high and feeling great. But we were fit to be tied and uptight because we'd been waiting forever." (UW52)

Holzer and one of the directors of Ciao! Manhattan, David Weisman would later, in 1985, co-produce the successful film version of Kiss of the Spider Woman. She was also involved with two other movies produced by Weisman - Spike of Bensonhurst (1988), directed by Paul Morrissey with Holzer credited as associate producer - and Naked Tango (1990) with Holzer credited as executive producer. Jane had also apparently been screen tested (unsuccessfully) for a role in the 1967 film, The Valley of the Dolls. (AD98)

In addition to her film interests, Jane also opened an ice cream shop in Palm Beach, Florida called Sweet Baby Jane's while living in both New York and Palm Beach. (UW47) Warhol produced a silkscreen portrait of Jane in 1975. (AD98)

In 2014 Jane was the subject of the exhibition "To Jane, Love Andy: Warhol's First Superstar" that took place at the Norton Museum of Art in West Palm Beach, Florida from 2 February 2014 to 25 May 2014.