The festival took place again the following year at the Elgin under the name of the 7 3/4th New York Film Festival. It included "Unedited Scenes from a New film" by Andy Warhol: 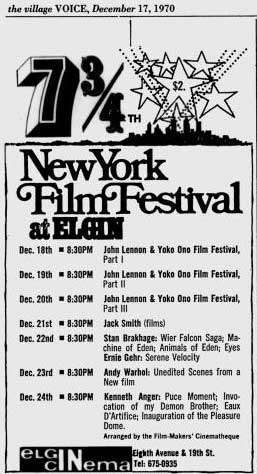 But Mekas began 1970 with a showing of Stan Brakhage films at the Jewish Museum, the venue that was used the most during 1970 for the Cinematheque.

Sausalito was originally part of **** (Four Stars). In the American Film Institution catalogue entry for the film, Nico is listed as the sole cast member.

"Sausalito (ca. 30 mins) Scenes of Sausalito, California, including boats, the docks, and streets. Eventually the setting turns to night and boats appear silhouetted against the sky. A woman speaks poetic phrases on the soundtrack: at intervals her face is seen. A band begins to play but ceases again as lights appear in distant windows."

Although the ads for most of Mekas' screenings during 1970 indicated that the screenings took place at the Jewish Museum, there were also events at the Cinematheque on Wooster Street. In January 1970, composer Stephen Dickman used the Cinematheque to produce a demo recording of rock n' roll versions of songs that he written with playwright Richard Foreman. According to Roslyn Bernstein and Shael Shapiro, Trisha Brown first performed her dance pieces, Floor of the Forest and Other Miracles at the Cinematheque on 18 March 1970. (RB98-9) According to the Trisha Brown Company's website, there was a performance of Floor of the Forest "in and around 80 Wooster Street" on 18 April 1970. In April and May 1970 George Maciunas arranged a series called Fluxfest Presentations of John Lennon and Yoko Ono in the Cinematheque. (RB101)

In his 5 June 1970 column, Jonas Mekas refers to a "stereo projection show" by Ken Jacobs at the Cinematheque (as per the ad below) but does not claim to have had anything to do with it. He writes "Since the audience couldn't be larger than 50 people for a good viewing, the show was not advertised. I was among the lucky 50." (p. 54) According to Roslyn Bernstein and Shael Shapiro, Mekas was unable to open Wooster Street to the public and "resorted to private events - a June special stero projection show for three truckloads of Ken Jacobs' films students from Harpur College." (RB85)

There is also an ad in the October 1st issue of the Voice for a Hermann Nitsch event at the Film-Makers' Cinematheque at 80 Wooster Street. Below that ad is an ad for films at the Jewish Museum. 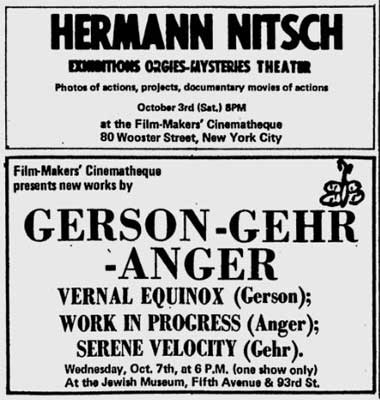 By November 1970, Mekas was advertising his new venture, the Anthology Film Archives, while continuing to use the Jewish Museum as a "Cinematheque." According to film scholar, David E. James, the Anthology was to be "a permanent home where the classic works of film could be shown on a regular basis. Jerome Hill, P. Adams Sitney, Peter Kubelka, Stan Brakhage, and Mekas himself drew up plans for such a museum, to be called Anthology Film Archives. A selection committee made up of James Broughton, Ken Kelman, Peter Kubelka, Jonas Mekas, and P. Adams Sitney were to establish "The Essential Cinema," a permanent collection of "the monuments of cinematic art.' Unlike Mekas' previous screenings, the Anthology was from the beginning critical and discriminatory." (DJ12) 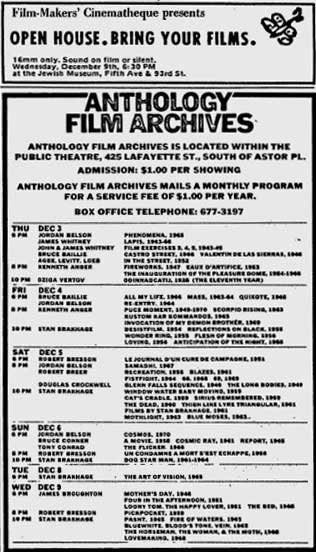 The films shown at the Anthology were a mixture of work by historically important underground filmmakers such as Stan Brakhage and Kenneth Anger and more commercial art-house films or even mainstream films. And of course Warhol. The schedule for March 1971 (below) for instance included the underground filmmaker Harry Smith and two Warhol films, but also Orson Welles' Citizen Kane. 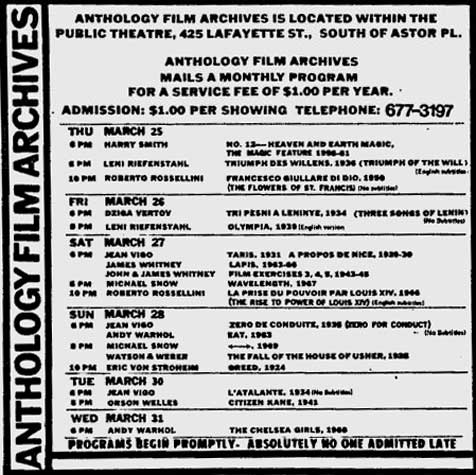 With the Anthology Mekas finally had a permanent place for screening films. What the screenings lacked in the 'bring-your-own-film' spontaneity of the "Cinematheques," they gained in the educational significance for anyone interested in avant-garde film. The Anthology remained at the Public Theatre until 1974 when their chief benefactor, Jerome Hill, died. It then moved to 80 Wooster Street. From Wooster Street it moved to 491 Broadway and in 1979 ended up at the 2nd Ave. Courthouse building in Manhattan which was purchased from the city for $50,000. (JMO) The Anthology is still at 32 Second Avenue (at 2nd St.). Their website can be found at here. The Film-Makers' Co-op continues to exist as a distributor of experimental film. Their website is here.