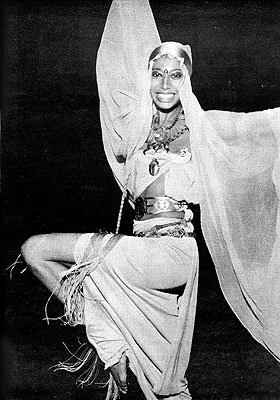 Donyale Luna in Interview magazine (June 1974) during a Zandra Rhodes fashion show at the Circle in the Square in NYC. Photo captioned "Donyale Luna's first public appearance in America since her sudden depature from Italy." (Photo: Bill Cunningham)

"Donyale Luna, a six-foot-one-inch model from Detroit, was one of the first black women to achieve national and international recognition in the world of high fashion, identified as 'the most photographed mannequin in Europe in mid-1966.' In April 1965 she was photographed by Richard Avedon for two feature articles in Harper's Bazaar magazine; in 1967 she inspired a line of fiberglass mannequins created by the British designer Adel Rootstein.

In addition to the Warhol films, Luna may be seen in several movies from 1968, playing God's (Groucho Marx) mistress in Otto Preminger's Skidoo, the fire-eater's assistant in the Rolling Stones's Rock and Roll Circus, and appearing in Peter Whitehead's documentary about 'swinging London,' Tonite Let's All Make Love in London. She also played the role of Oenothea in Fellini's Satyricon (1970) and starred in Carmel Bene's 1972 film Salomé. Donyale Luna died in Rome in 1979.

In addition to her Screen Tests, Luna can be seen in Warhol's 1965 film Camp performing a runway walk in a fur coat; in 1967 she also starred in a thirty-three-minute color reel titled Donyale Luna, a version of 'Snow White' in which she wears bright blue contact lenses and has thirteen young boyfriends..." (AD118)