Suzanne Tremblay will be presenting a "Gershwin Hotel Extravangza" and "Warhol Factory Legacy Party" at The Gershwin in New York on Valentine's Day, 14 February from 9 to 11 pm. Free admission includes a special set by Phoebe Legere, a cameo by Dottie Lux and a jam session by the Gershwin All-Star performers. DJ Tennessee will be doing the music.

The press release for the event has the following message:

"The Gershwin Hotel wants to say thank you to all the incredible artists and performers who have given so much of their talent and made us such a beacon for the cultural life of this city. Grateful to: Debbie Harry, Jared Harris, Nina Hagen, Glenn O’Brien, Ira Cohen, Taylor Mead, Penny Arcade, Edgar Oliver, Anthony Haden-Guest, Billy Collins, Brigid Berlin, Jonathan Ames and so many more. Our love goes out to Neke Carson & Michael Wiener for over a decade of non-stop shows."

from Standard Gauge (1984) by Morgan Fisher

An exhibition of the work of filmmaker/artist Morgan Fisher opens at Raven Row in London on 24 February 2011 - the first retrospective survey covering forty years of the L.A. artist's work.

An interview with Fisher can be found on the BFI website here. 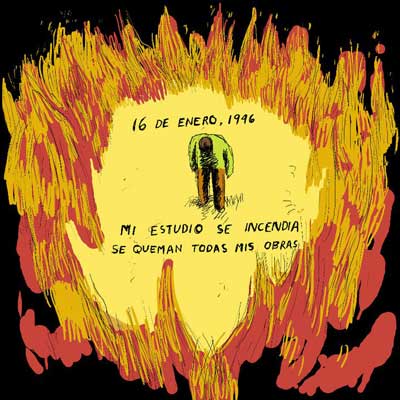 A talented young artist from Mexico named Jerónimo Rosales has created a series of comic strip panels detailing the last days of Arshile Gorky based on the account in The AbEx Chronology. His comic strip can be seen here.

Once you get to the album, begin with the first picture of Gorky and click on "next" for the full series. (Use Google translate if you need to translate the text.) Highly recommended.

Andy Warhol's boyfriend in the early '60s and the star of Sleep, John Giorno, will be appearing at MoMA on 3 March 2011, along with the artist Conrad Ventur who will be showing his Screen Test films. 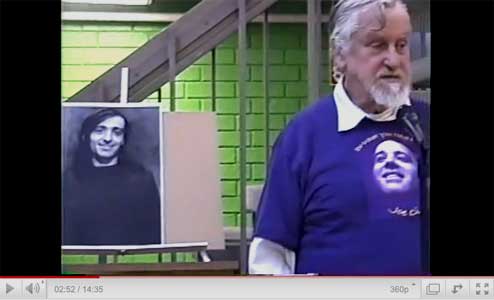 "I saw a boy with long hair and jewelry around his neck and thin linen pants obviously wearing no underwear... his name was Johnny Dodd."

Caffe Cino playwright Robert Patrick has posted a 14 minute clip on You Tube of a lecture he gave about the Cino. Click on image above or go here.

The full lecture is available on DVD here.

"The 1968 Exhibit" will open at the Minnesota History Center on October 14, 2011 before traveling to the Oakland Museum of California (March 31, 2012 to August 19, 2012) and the Atlanta History Center (October 6, 2012 to February 24, 2013). The exhibition focuses on events in a single year - 1968 - including the shooting of Andy Warhol by Valerie Solanas, author of the S.C.U.M. ("Society for Cutting Up Men") manifesto. A page devoted to the event can be found on the exhibition's website here.

A copy of Solanas' S.C.U.M. manifesto can be found online here.

The Warholstars page about the shooting is here.

Detail from a 1962 letter to Bill Wilson from Ray Johnson (repr. in The Name of the Game: Ray Johnson's Postal Performance (click on image for full letter)

The Guardian newspaper has dubbed Ray Johnson the "godfather of virtual art" in an article about the VIP Art Fair taking place for one week only (22 - 30 January 2011) here.

Johnson committed suicide on 13 January 1995. An essay about him by the recipient of the above letter, William S. Wilson, can be found here.

The Guardian article can be read here.

The John Hasard Gallery in Southampton and the Southampton Art Gallery will be showing "Andy Warhol Artist Rooms on Tour" featuring works by Warhol donated to the nation by Anthony d'Offay from March 27 - June 26, 2011.