The Nation's Nightmare was a CBS Radio broadcast consisting of six episodes focusing on organised crime. The first episode was about the illicit drug trade and can be heard on YouTube: 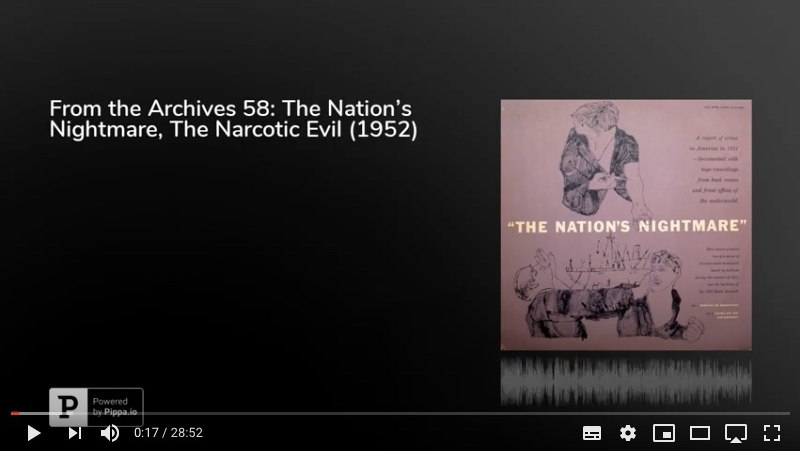 First episode of The Nation's Nightmare

The narrator - news correspondent, Bill Downs - sets the scene, sounding like Rod Serling introducing The Twilight Zone, as he proclaims, "A nightmare is a bad dream. You can wake up in the morning and it's over. You can forget it. But the nation's nightmare of organised crime does not disappear the morning after. It's still there, harder, sharper and more tortured than any dream."

The first episode was broadcast on July 19, 1951 and the entire series was re-broadcast beginning September 13, 1951. The full-page advertisement in the New York Times that announced the second broadcast of the series featured a drawing by Andy Warhol of a young man shooting up: 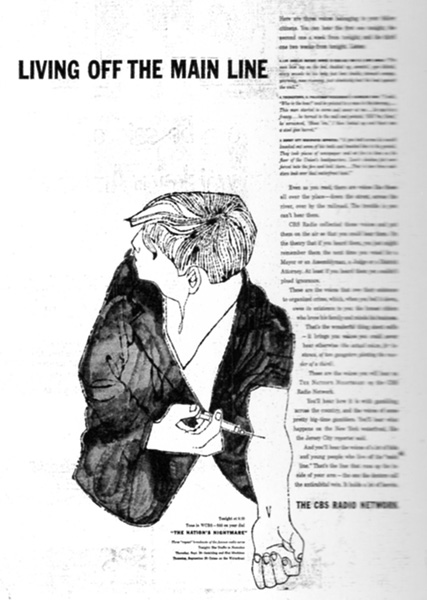 The following year, 1952, an album was released of two of the series' episodes - episode one about the illicit drug trade and episode six about organised crime infiltration of the Longshoreman's Union. Andy Warhol's illustrations appeared on the cover of the album: 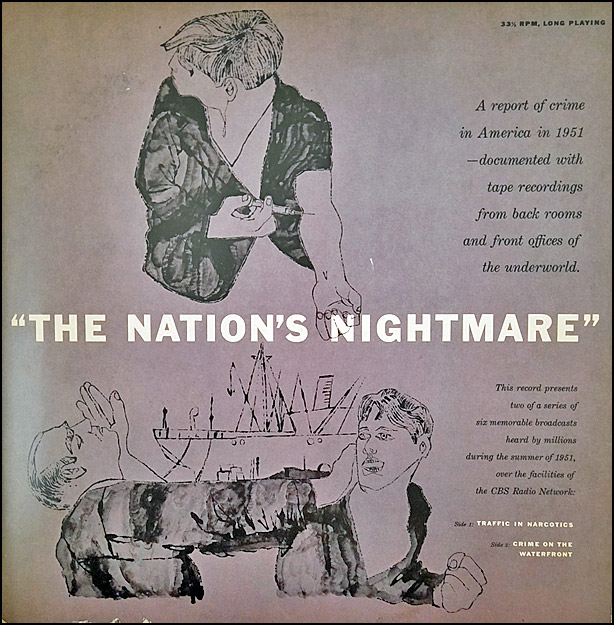 Warhol's illustrations also featured on the centre label of the album. The "Traffic in Narcotics" illustration was side 1, the "Crime on the Waterfront" illustration on Side 2: 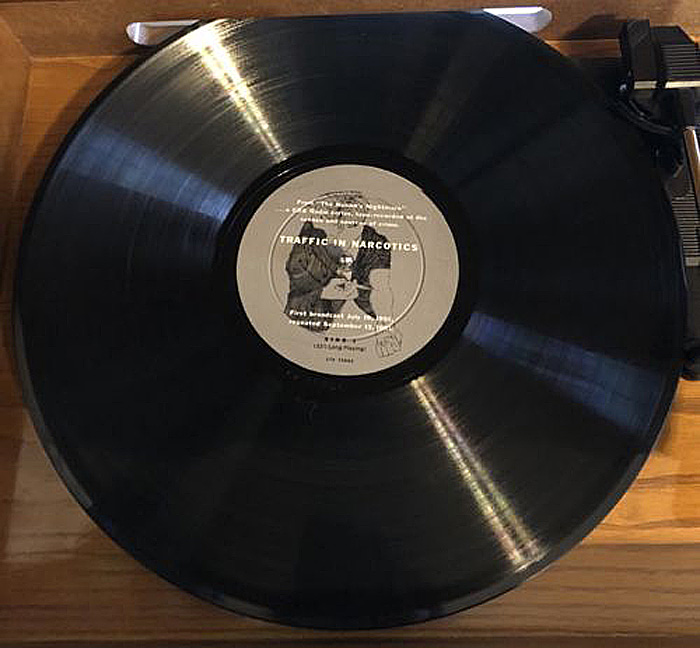 Above: LP showing the label in the middle (Photo source: Roots Vinyl Guide)

Bill Downs is quoted on the the website, billdownscbs, as saying, "the album “is valuable because the cover art was designed by a then-unknown Andy Warhol, who in 1951 won a contest in New York held to design the cover.” Warhol was not unknown at the time. In his first couple of years in New York he had designed three previous album covers, in addition to his magazine work.

The "contest" claim also appears in the album catalogue raisonne, but no documentary evidence of such a competition is presented. A quote by Lou Dorfsman, the art director at CBS at the time, is included in the album cat. rais. but Dorfsman doesn't mention the competition. The quote originally appeared in the exhibition catalogue for a show at the Grey Gallery - "Success is a job in New York..." The Early Art and Business of Andy Warhol). Dorfsman gives the impression that he directly commissioned Warhol to do the drawings, comparing Warhol's style to that of Ben Shahn:

I was the creative director of CBS, that was one job to interpret the needs very carefully, for example to cast Andy in his role... Andy Warhol had the visual impact that I wanted for such a subject. Three's a gritty quality about the style... Shahn brought the same thing to it; that's where I cast Andy in that role... I'd say... what about a guy shooting up; heres's the layout I'm doing and I don't want to restrict you, whatever I do, I'll make it work... so you just do it and I'll may make my typography and layout work around it... I just explained to him what the program was all about... and left it to him. ("Success is a job in New York..." The Early Art and Business of Andy Warhol, p.53)

The claim that Warhol won some sort of contest in order to get the advertising job, may have originated with a comment made by David Mann the manager of Alexandre Iolas' Hugo Gallery which appeared in the Warhol biography, Loner at the Ball by Fred Lawrence Guiles, p.95. (See sources.)

In the book, Mann comments on Warhol's exhibition on one floor of the Hugo that consisted largely of drawings of Truman Capote (June 16 - July 3, 1952) (Guiles, p 95) (The painter, Irving Sherman was showing his paintings on an upper floor of the gallery - a nude by Sherman is in the collection of the Metropolitan Museum of Art.)

Mann mentions Warhol participating in "some kind of poster contest...against drugs" after commenting on the Hugo show.

Very few people came because it was pretty much the end of the season... I remember that Truman [Capote] came and looked at them. He loved them... He came with his mother. They both liked them very much... The next thing I knew, Andy told me he'd won some kind of poster contest. I think it was for NBC, a series of programs they were doing against drugs. He did one of his black-and-white drawings. They used that and that kind of shoved him to the forefront.

His description of "a series of programs they were doing against drugs" sounds like The Nation's Nightmare, but it was CBS, not NBC. Also, Mann says that Capote attended the exhibition of Warhol's Capote drawings but other sources have said that Truman didn't attend the show. Warhol's commercial art assistant, Nathan Gluck who started working for Warhol in in the early 1950s, said that Warhol "was very upset because Capote never came to see the drawings." (PS332) When Andy Warhol interviewed Truman Capote for Rolling Stone magazine, neither Truman nor Warhol mentioned the exhibition although Warhol did mention the fan letters he wrote to Truman before he (Warhol) became famous. (AWA)

Warhol won an Art Directors Club Medal for his "newspaper advertising art" for CBS Radio in 1952, presumably for The Nation's Nightmare graphics. 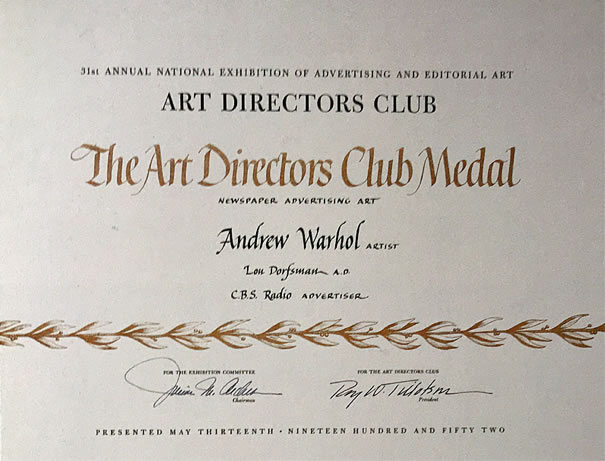 The Art Directors Club Medal presented to Andy Warhol in 1952

The award was presented the month before the opening of the Capote exhibition - when the show was probably in the planning stages - and it is likely that Mann confused the Art Directors award with a "poster" competition.