Bradley Walker Tomlin was the youngest of four children born to Charles H. and Matilda Arnelia (Hollier) Tomlin. Bradley showed early promise as an artist, receiving encouragement from his art teacher at Central High School in Syracuse, Cornelia Moses who had studied under Arthur Wesley Dow. In 1921 he graduated from Syracuse University with a Bachelor of Painting degree and received a Hiram Gee Fellowship award of $500 for a year's study abroad. He moved to New York the same year where he designed covers for the Condé Nast magazines, House & Garden and Vogue from 1922 - 1929. In the autumn of 1923 he took a year off to visit Europe, living at 81 Place du Pantheon in Paris and studying at the Académie Colarossi and the Grande Chaumière. He would return to Europe several times during the late 20s/30s. (BT56-57)

In the mid-1920s he discovered Woodstock, New York and visited there regularly during the summer months, sharing a studio with the painter Frank London. He purchased a home there in the early 1940s but also continued to live in Manhattan at various addresses. During the winter of 1948/49 he shared a studio with Robert Motherwell in Manhattan and for a brief period in November/December 1949 rented a loft with Philip Guston (who also had a place in Woodstock) at University Place between 12th and 13th Street. Their studio spaces in the loft were separated by a partition built by Franz Kline. (BT28/EW9/DA83/MM48-9)

Much of Tomlin's work from the 1930s was semi-abstract figuration painted in a cubist manner. During the late thirties his forms became softer, influenced by Surrealism. In the 1940s he returned to harder edged forms. By the end of the 40s he was painting pure abstractions of ribbon-like forms and uneven rectangular shapes. 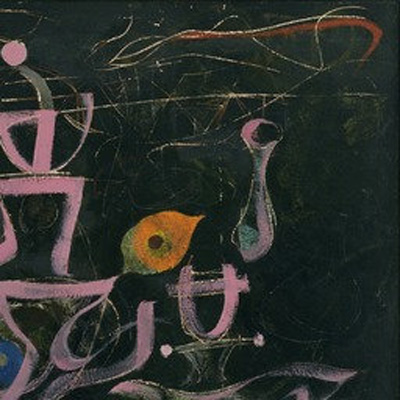 "Whatever the cause (he is also known to have destroyed some of his early work), very few paintings of the middle 1930's now exist. Still, there is evidence that Tomlin began to question seriously, at this time, his direction as an artist. An old friend, the painter Gwen Davies, tells of his visit to the Museum of Modern Art's exhibition, "Fantastic Art, Dada, Surrealism" in 1937. Deeply repelled at first, he kept returning with fascination, finally confessing that other art began to look dull in comparison. It was probably soon afterwards that he attempted the semi-abstract Collage, which is undated but incorporates an envelope addressed to him at 264 Fifth Avenue, where he lived only briefly, from 1936 to 1938. The stylistically related watercolor, Two Figures and Easel, must have been done at about the same time." (BT25)

Another influence for Tomlin was the work of artist Adolph Gottlieb. In 1941, after viewing Adolph Gottlieb's work at the first annual exhibition of the Federation of Modern Painters and Sculptors at the Riverside Museum, he wrote to Gottlieb, ""I have felt like writing you to tell you how fine I think your canvases are at the Riverside show... I wish I had a little of your simplicity." (BT27) Four of the paintings on exhibit were from the Surrealist series of canvases that Gottlieb produced while living in the Arizona desert from c. December 1937 to June 1938. (GA)

"My impression was that the Cubist type of still life he [Tomlin] had been painting for years bored him. . . . He seemed very curious about all the newer painters, wanted to meet them and was enthusiastic about the new directions in which painting was going. Also at about this time I made some paintings somewhat different from my pictographs, and these seemed to make an enormous impression on Tomlin, particularly one painting in 1948 or 1949 called Sounds at Night. When he saw this painting in my studio he suggested the title because the painting struck him as a visual equivalent of sound. This painting was composed of white linear shapes, about the width of a brushstroke, almost completely abstract, on a dark gray ground. Soon thereafter I saw some of his paintings in which he employed white linear shapes, also brushstroke width on gray grounds, in the form of abstract shapes and symbols and done in a very dashing manner." (BT27-28)

Both Tomlin and Gottlieb were one of "The Irascibles" - an ad hoc group of artists who were photographed for Life magazine on November 26, 1950 after they sent a letter to The New York Times objecting to the Metropolitan Museum of Art's choice of jurors for the "American Art Today - 1950" exhibition due to open in December. Excerpts from the letter were published in an article titled "18 Painters Boycott Metropolitan; Charge 'Hostility to Advanced Art'" in the May 22, 1950 issue of The N.Y. Times.The letter, composed mostly by Gottlieb, criticized the jurors for being "notoriously hostile to advanced art." In addition to Tomlin and Gottlieb, sixteen other artists signed the letter including Abstract Expressionists Robert Motherwell, William Baziotes, Barnett Newman, Clyfford Still, Jackson Pollock and Mark Rothko " (Although Rothko's name appeared on the letter, he was actually in Europe at the time. He had left on March 29th for a five month trip after suffering a "breakdown" in New York in 1949. (RO286)) Gottlieb had suggested sending the letter after a three day symposium in April 1950 at Studio 35 organized by Robert Motherwell and Ad Reinhardt which Tomlin attended. The symposium was held to discuss the abstract art movement in New York. Names suggested for the movement at the symposium included Abstract-Expressionist, Abstract-Symbolist and Abstract-Objectionist. Of the artists involved in the yet-to-be named movement Tomlin was probably closest to Robert Motherwell, Jackson Pollock and Philip Guston on a social level. Guston, like Tomlin, had a place in Woodstock in addition to a studio in Manhattan.

In his development at this time, Tomlin owed much to several other artists, notably Robert Motherwell, Philip Guston and Jackson Pollock, all of whom became close friends. In 1948-50 he worked winters in Motherwell's studio on Astor Place, and the last few summers of his life were spent in a studio at Woodstock (in the Maverick) which he shared with Guston. Frequently he visited the Pollocks on Long Island; just before his death he contemplated buying a house near them. Having cast his lot with the avant-garde group, he committed himself completely to their theories, their discussions, their meetings, and their way of life, so different from what his own had been. With them he attended Friday evenings at Studio 35 and became a regular inmate of the Cedar Bar. Leaving Rehn, he joined the Betty Parsons Gallery, where so many of the others exhibited, or had done so. He agonized over this move for some time, Adolph Gottlieb says, "but finally decided he wanted to show with the people whose work he found congenial."" (BT28-29)

In 1950 Tomlin signed with the Betty Parsons Gallery and had a one man show there the same year. Previous one man shows had taken place in 1926 and 1927 at the Montross Gallery and in 1931 and 1944 at the Frank K.M. Rehn Galleries in New York. His second show at Parsons gallery was in the spring of 1953. He attended the show on its closing day - April 18. Less than a month later he was dead. On Sunday, May 10, 1953 he had attended a party at Jackson Pollock's house on Long Island. Feeling ill he left the party and arrived home about midnight. He was admitted into hospital at 3:00 in the morning and placed in an oxygen tent. He died at 7:00 pm. (He had previously suffered a heart attack in 1952 which had left him hospitalised for several months.) His funeral service was held at St. Bartholomew's Church in New York. (BT33)

He [Bradley Walker Tomlin] loved painters and painting. This is the essential fact about him. In everything else, he was a dandy and a dilettante, at great ease in any social circumstance. One would have thought that he was the son of an Anglican bishop or a British general, he had an air - so that it would have surprised none of us if he indeed had been, though I realize now that he was his own construct, from the military moustache to the Brooks Bros. scarf... He liked me, because he regarded me as a gentleman too; but he loved me, as he did Philip Guston and Jackson Pollock, because of a wholehearted and perhaps reckless commitment on our parts - he never understood real despair - to painting, and the acceptance of the existential consequences it brings about in one's life.

Guston, Pollock, and I were a generation younger, all reared in California... the three of us filled with a self-torment and an anxiety that was alien to Tomlin, but to which he must have deeply responded, to have loved us so much in turn... I have only known two painting milieus well personally, the Parisian Surrealists, with whom I began painting seriously in New York in 1940, and the native movement that developed in New York that has come to be known as "Abstract Expressionism," but which genetically would have been more properly called "Abstract Surrealism" - the first exhibition quarters of the movement were Peggy Guggengeim's "Art of This Century," which otherwise was a museum of abstract and surrealist art. Mondrian and Léger were also in New York, where Mondrian was to die in 1944; but it was the influence of the European Surrealists - with Joseph Cornell, David Hare, Noguchi, myself, and a little later, Gorky, as transmission agents - that acted as the catalyst for the explosion of "Abstract Expressionism."

...My emphasis is that the social attitudes of the Surrealists were ironical, humorous, and often destructive, imbedded in a superb poetic awareness; the social attitude of the Abstract Expressionists despairing and sometimes self-destructive, a feeling in almost any social situation of 'what am I doing here?,' no less poetic in awareness; while Tomlin's social dilettantism left him comfortable and at ease everywhere. What contrast! Indeed, I believe the struggle that his lifework portrays is an effort to overcome the sense of style that every dilettante has with the sense of existence that every artist has. From this point of view, his art represents a genuine human drama, a genuine existential problem in art; if in life he was a dilettante, then in art he was involved in a heroic struggle, whether he succeeded or not; and we all in turn were moved by him - which was precisely and all that he wanted from us painters. How extraordinary that such a man had so much nerve! I think of the horde of empty faces that has come to surround and penetrate our milieu; Tomlin's face was full-formed. . . . O Bradley! Choose any direction on the compass that you like, all roads lead to death." (BT11-12)

back to Bradley Walker Tomlin is born in Syracuse, New York