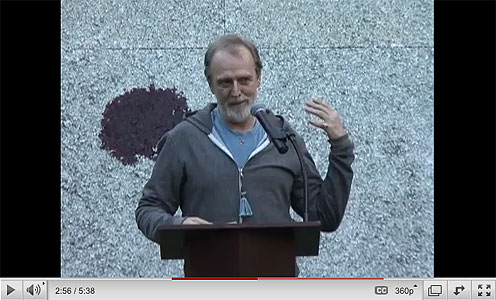 Rene Ricard, star of The Andy Warhol Story, reads a poem in New York in 2010

After Lupe, Edie left the Warhol crowd for the Dylan crowd - with Dylan's manager hoping to turn her into a singer and/or actress. However the plans never materialized and Sedgwick started visiting the Factory again "asking for pills and money". According to Victor Bockris, "Andy always gave her a few dollars and an Obetrol if he had a spare one on him" and "put her in one last movie, to try, as he said, to 'help her out'." (LD260) (Warhol, himself, always denied giving drugs to Edie.)

"Rene Ricard was supposed to be Andy and Edie was in it with him. She was in a bad way, and we thought we could help her, even though she had been so mean to do what she did [leaving Warhol]. Andy really liked her and I did too. We thought it might work, but it wasn't any good. All Rene did was look in the camera and say nasty things about Andy, and it was really embarrassing because he thought he'd be funny. I remember very well Andy just not finding it funny at all, but anybody else in that circumstance would have turned the camera off and he wouldn't."(LD26)

According to Rene Ricard, it was Rene who insisted on using Edie Sedgwick in the film:

"I made a film with Edie about nine months after she left the Factory. Andy suggested, 'Let's do a movie with you as me in it. The Andy Warhol Story.

I really hated Andy by then. I realized his was a passive exploitation - that it could be humiliating and horrible. He had been asking me to do this for a long time and I had refused. But one night I took an Obetrol - a very powerful twenty five milligram amphetamine pill, the best. They were very hard to get, rare and very good.

That night we were making this Tiger Morse movie, part of a twenty-four hour four-star movie in which I was supposed to be an extra. 'Don't do too much talking', I was told. Well, the pill got me hysterical and I was amazingly good at it. Andy fell in love with me for it. Once again he said, 'Oh, you're so good tonight; let's do that movie I've wanted you to do.'

So I finally said okay. The only reason I agreed to do his film was to get even with him.

I said, 'Okay, let's go to my place and do it.' I was living in a very beautiful apartment on Fifth Avenue with Avery Dunphy, who was being kept in this luxurious place by a doctor who was mad for prissy Wasps. Mirrored coffee tables, a huge white silk-satin couch.Beautiful, right? What Avery wanted to be was chic -which was all anybody wanted at that time. Having Andy Warhol make a movie in that apartment, even though it wasn't his, was very chic. I called Avery and told him what was happening - that we were on the the way. I told him, 'I want orchids. I want the place filled with orchids.'

He asked, 'Well, where am I going to get orchids at this time of night?'

I told him about a place in the East Sixties that's openuntil mid-night. I figured I'd do it right. Right? I didn't have any money, but at least I could have orchids.

Besides, I was trying to get even with Andy. So Avery went out and bought the most exquisite orchids you've ever seen. He bought orchids to die over. I know the difference between good orchids and vulgar ones, and these were expensive and good - from Hawaii or Vietnam, which is where Paris gets its orchids.

When we all got to the apartment, Andy asked, 'Who do you want in the film with you?' I said 'I only want Edie Sedgwick. Who else is there in your life but Edie Sedgwick?' Andy said, 'I don't know if we can get her.' I said, 'I won't do it without her.'

I took another pill and I got wired. Wired! There's a point when you take speed when you talk a lot, and yet there's also a point where you take too much and you don't talk. That's the point that second pill got me to.

So Andy got Edie on the telephone and offered to pay for her taxi, and about three hours later Edie turned up. I didn't want to make the movie when I saw her. She was wearing a dirty blond fall. She looked like the cheapest piece of filth.

Here was my Edie, my Edie, and I was making a movie with her - co-stars! No longer was I an extra, and she looked like hell! She was wearing a kind of Marimekko type dress, and mean! She, too, hated Andy at that point: she had been eighty-sixed.

Well, when she arrived at the apartment, the cameras started rolling. I had my own personal vendetta against against Warhol, and so did she. And I was playing Warhol. So I played him the way he behaved to the people under him. She played herself according to how she felt about him then. The things she said to me were horrible. I don't remember them. I don't even remember what I said. I was awful. I have nightmares about what I did in that movie... saying things about Andy that were true, how he disposed of people.

Paul Morrissey, who was behind the camera, was white with rage. I went through the paintings... how Andy doesn't actually do the paintings himself. Stupid things like: "Gerard get me an egg. Do you want to know howI paint my pictures, you people out there?' I'd crack the egg in a glass and then I'd say to Gerard: 'Cook it!' That's how I paint my pictures.'

We did one reel and stopped. Then Andy in his sick, masochistic, dreadful way - after all, here were these two people on camera saying the most ghastly things about him - said 'Let's do another reel.' He had been standing holding his fingers in his mouth, which he does when he's anxious, and he was loving it... getting the truth.

So we did another reel, and in this one it got violent. Edie started it. At some point I gave her some orchids. I said, 'You're not dressed up enough for this movie. So do something. Take these flowers.'

She took them and crushed them. I got very upset. And I - me, Rene Ricard, not the Andy Warhol me - was just made demented by that. I love orchids. It was a personal thing from me to her. I said, 'You really need to fix yourself up, my dear. Put them on you somewhere.'

She cried out, 'I hate them! I don't want to be beautiful!'She wrecked the flowers. Edie was hating me. We were both hating each other because of the roles we were playing... I loved Edie, but I couldn't stand being in a movie with her the way she looked. She was horrible in the movie, and mean. The things I was saying were so horrible.

Paul Morrissey suddenly reached out from behind the camera and ripped my clothes off me - a new white silk shirt and new pair of white linen pants. He ripped them. The camera was turning. Paul was out of the frame. I guess he was livid because of the things I was saying about Andy.

So we finished the film - two reels. Edie rushed home. I didn't care about her at that point. My clothes were a ruin. I was a mess. I was wiped out by the pills. Dazed.

You'll never guess what happened then. Andy Warhol at that point was close to a guy called Rod La Rod. He was handling the sound on this film. They asked me to see the rushes in the Factory. I sat there watching it - Paul, Andy, Rod and a few of the other serfs were there -and I saw what they had done to it. Edie's voice is there, but when I speak, you can't hear it. They were in glee." (EDIE285-7)

According to Victor Bockris in his book on Warhol, Edie looked "as tawdry as Ingrid Superstar" and "the movie was such a torturous document of Edie's disintegration that the one time it was shown at the Factory, those watching begged Andy to turn it off." (LD260)

The Andy Warhol Story is also mentioned by Callie Angell as part of the Andy Warhol Film Project under the auspices of the Whitney Museum of Modern Art. According to Callie, Edie "apparently appeared in The Andy Warhol Story (or Rene as Andy), an unreleased and reportedly vicious two-reel feature made in 1966, in which both Rene Ricard and Edie pretend to be Andy Warhol." (FAW25)