Valerie Solanas was originally indicted for attempted murder, assault and illegal possession of a gun. Ruled as insane after psychiatric tests, she spent the next five years in and out of mental hospitals, escaping twice. Maurice Girodias published the Olympic Press edition of the SCUM Manifesto in the summer after her arrest. (FAH208)

Valerie was initially sent to the Women's House of Detention and then assigned to Elmhurst Hospital in Queens, New York. Psychiatric tests at Elmhurst included an IQ test. Valerie scored 131 placing her in the top 2 percent of the population. She was diagnosed as "Schizophrenia, Chronic, Paranoid type." (FAH200/204)

In late August 1968 she was transferred from Elmhurst to the Matteawan State Hospital for the Criminally Insane by the court, with a diagnosis of "Paranoid State with Affective Features and Emotional Instability." (FAH219)

In December she was returned to court and a $10,000 bail was set. Valerie's friend, Geoffrey LeGear, paid the bail. She was free for the time being. The bail and her custody situation prior to that point was detailed in the Village Voice by Howard Smith in his "Scenes" column: 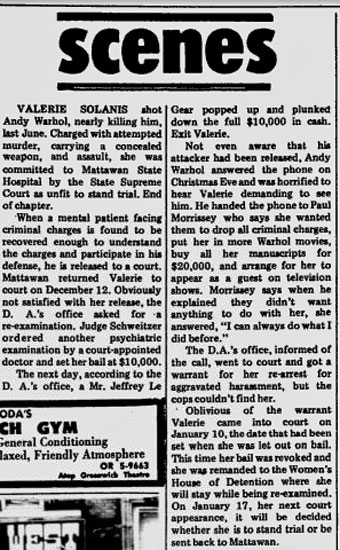 On 9 January 1969 Valerie was arrested again for making threats against Warhol and Maurice Girodias. She was remanded to the Woman's House of Detention and then transferred to Elmhurst in May. Later in May she was transferred to Bellevue. On June 9th, while she was still in Bellevue, Judge Culkin sentenced her to three years, including time served, on a reduced charge - "reckless assault with intent to harm." In May 1970 Valerie was transferred to Bedford Hills for a few weeks before being transferred to Matteawan. In April 1971 she escaped from Matteawan and was on the run for two months. On June 16th she was recommitted to Matteawan. Later that month she had served her full sentence and she was discharged permanently. (FAH235/240)

Once free, Valerie continued with her threats and demands. In one letter, dated 1 August 1971, and sent to Barney Rossett (editor of Evergreen Review), Maurice Girodias, Robert Sarnoff (chief executive of RCA) and muli-millionaire Howard Hughes, she claimed to have been kidnapped, demanding 50 million dollars for her release and the publication of the original SCUM Manifesto in the Daily News. (FAH245)

On 5 November 1971 Valerie showed up at Barney Rossett's office with an ice pick, threatening to use it. She was arrested, charged with aggravated harassment and held for psychiatric observation but released as there were insufficient grounds to keep her. She was arrested again in December 1971 for harassment and sent back to Elmhurst Hospital for psychological testing. Elmhurst certified her as mentally ill and recommended that she be sent to a secure state hospital until she recovered. Barney Rossett initiated criminal proceedings against her and she entered Dunlop Psychiatric Hospital on January 21, 1972. She escaped from Dunlop in early February. She was re-arrested while approaching the Grove Press offices and a court date was set for March 22, 1973. (FAH246-250)

She continued her harassment of Barney Rossett and Fred Jordan (Vice-President of Grove Press), claiming in one missive that "you knew where I was when I was in front with the icepick" because of a "transmitter in my uterus." Barney and Fred's lawyer worked out a deal where she would not be released from Dunlop until she stopped harassing them. She stopped and she was released for the last time. (FAH250/254)

In 1974 Valerie left New York for Washington D.C. but then moved back to New York. In February 1975 she went to live near her sister in Florida. From 8 February 13 to 8 October 1975 she was in South Florida State Hospital in Hollywood, Fla. It was her last stay in a mental hospital. After she got out, she moved back and forth between New York and Florida. In late 1975 she moved back to New York for a longer time and worked as an editor for Majority Report magazine for about 18 months where she reinvigorated some of the arguments and issues covered in the SCUM Manifesto. In about May/June 1975 she published her own edition of the Manifesto after Olympia Press went bankrupt and the rights to the work reverted back to her. (FAH271/296)

On 25 July 1977 the Village Voice published an interview with her which follows - click on the image to bring up a larger version of the interview: 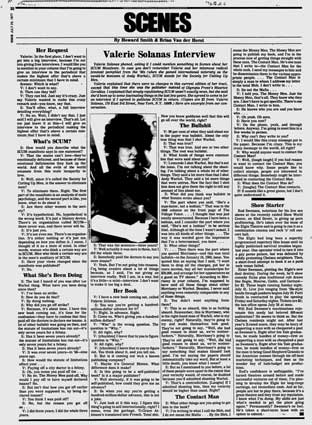 Valerie's response to the published interview was included in the following week's Village Voice (see below). At the end of her response she is asked "Valerie do you want to get into a discussion now about shooting people?" She replies "I consider that a moral act. And I consider it immoral that I missed. I should have done target practice."

The edition of the SCUM Manifesto that Valerie brought out was printed by Majority Report. Their distributor, Joanne Steele, helped to distribute the manifesto which was also advertised in the magazine. Despite their best efforts, the book didn't sell. Valerie told Joanne to destroy the remaining copies. (FAH283/296/313).

By late 1979 Valerie was missing. Her mother, Dorothy Moran, filed a missing report on her without success. (FAH318). From 1981 to 1985 Valerie lived in Phoenix Arizona. The address she used for the Social Security SSI department was 620 North Second Street, but according to Breanne Fahs, she lived mostly on the streets:

"It did not take long for Valerie to make her presence known. A former Phoenix police officer and current writer, Bud Vasconcellos (also known by his pen name, Bud Maxwell), spoke of his encounters with Valerie, which started in the early spring of 1981: 'The first time I ran into Valerie Solanas I was working the downtown afternoon beat and we got dispatched the radio code of a 918, saying that there was an insane person, a white female in her mid-forties, standing in the middle of Central and Washington, wearing a nightgown, and crowing like a chicken. She was stopping traffic.' Bud and his partner, Rick Nassy, drove to the scene and got out of their car. Valerie, gaunt and thin, was standing in the intersection barefoot, wearing a white nightgown that came down to her knees and wrapped in a thin white blanket. 'She looked like Casper the ghost,' Bud said; she wore the blanket so that others couldn't see her.

The thinness of the blanket allowed Valerie to see out from underneath it, and as Bud and his partner approached, Valerie took off running. 'And the whole time she is running, she's just going, 'Caw, Caw, caw.' Horns are honking, people are looking, people are laughing, and I looked at my parther and I said, 'I'm not chasing this crazy girl, are you?' He was a kind of laid-back cop and he goes, 'Nope!' Bud said that Valerie must have just arrived in town because they walked that beat all the time and had never encountered anyone like her. 'We would have known if she had been there.'

Nearly every day for the next three years, Bud and his partner had some interaction with Valerie... On several occasions, they saw her bathing nude or washing her feet in the fountain in front of the downtown library on Cental and McDowell around three or four in the morning. She slept on park benches in dark alleys and roamed the streets, crowing and frightening the businesspeople who worked in the offices downtown..."

From 1985 - 1988 Valerie lived in San Francisco. After a brief stay at 149 Ninth Street, she lived in room 420 of the Bristol Hotel at 56 Mason Street. In the 1990s, Bruce Boone, one of the founders of the New Narrative literary movement in San Francisco, spoke to two residents of the hotel who knew Valerie. They told him that she supported a methamphetamine habit through prostitution. (FAH324)

By April 25, 1988, no one had seen Valerie for a week and the rent was overdue. The supervisor at the Bristol Hotel, Lev Krayzman, used a pass key to unlock her room. Upon entering, he discovered Valerie 'kneeling on the floor of the one room apartment, and her upper torso was facing down on the side of the bed. Her body was covered with maggots and the room appeared orderly.' The police report (misspelling the name as Valerie Solanos) continued, 'Krayzman did not touch or move Valerie but opened an unlatched window in the room due to the foul odor.' The coroner's report gave the cause of death as acute and chronic aspirational bronchopneumonia and centrilobular pulmonary emphysema. The report also noted cachexia and fatty metamorphosis of the liver. Valerie likely died from pneumonia brought on by (incurable and smoking-related) emphysema.

The police recorded Valerie's death date as the day Krazman discovered her body (April 25, 1988), though given its deterioration, Valerie's actual death likely occurred two to three days prior. Valerie had knelt for days decomposing in her small room."

Valerie was cremated on 9 May 1988. At the request of her mother her ashes were buried at St. Mary's Catholic Church Cemetery at 5612 Ox Road in Fairfax Station, near her mother's home in Virginia. After her death, Valerie's mother destroyed all of Valerie's belongings so that her daughter could rest in peace. (FAH329-30)

For a more detailed account of Valerie Solanas' life, her biography Valerie Solanas: The Defiant Life of the Woman Who Wrote Scum (and Shot Andy Warhol) is available through the Feminist Press here.