Below is a tribute to Taylor Mead by this family: 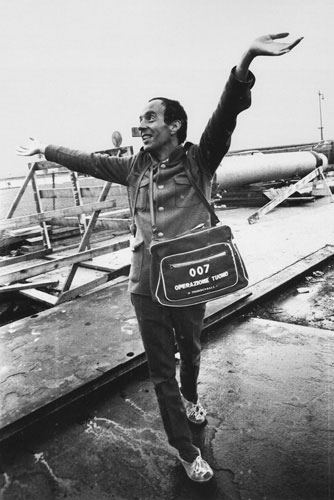 “Art is all a scandal – life tries to be, Taylor Mead succeeds, and I come close.” – Tennessee Williams

An Andy Warhol Superstar actor of the Silver Factory days, Beat poet, and author of many books of poetry and aphorisms, Taylor Wood Mead was born December 31, 1924 in Detroit, Michigan to Harry H. Mead of Valparaiso, Indiana and Priscilla Wood Mead of Wilmington, Ohio.

After moving to Columbus Ohio, Taylor spent happy summers at his grandfather Wood's house in Wilmington where he created his first scandal. At age 4, he trotted two blocks away to the Wilmington bus station where he boarded a bus to Columbus (how did he know?). He was discovered at a stop, half way from home, when all the adults left the bus. The police finally discovered where he belonged. A neighbor's chauffeur drove Taylor's mother to find Taylor who was sitting calmly by the bus station in his little red suit, happily lapping an ice cream cone. It made headlines in the Wilmington News-Journal thus his first taste of fame!

The family moved back to Detroit shortly thereafter.  Starting out in Detroit schools, Taylor then attended Detroit University School (DUS, now University Liggett School) in Grosse Pointe. After his mother died of cancer at age 42, he was sent to Loomis School in Windsor, CT where he graduated in 1942. At DUS, his school chums included William Clay Ford (with whom he was again chauffeured around) and Arthur Ochs Sulzberger Sr at Loomis. The latter repaid a five dollar “debt” and bought lunch after Taylor disclosed in the Village Voice the decades-old delinquency.

After Loomis, Taylor attended the Pasadena Playhouse. He left after a year to join the Army and to fight in WWII. Mistakingly declared 4F by a doctor thinking his droopy eye was caused by a disease, Taylor was disappointed that he could not enlist. (Taylor liked to joke it was caused by forceps used to aid in removing his over-sized head during birth.)

Soon after, he started a Bohemian lifestyle by migrating to join the Beat scene in San Francisco. He starred in his first Underground film (and one of his favorites) “The Flower Thief”. Directed by Ron Rice, this 16mm film was shot with a hand-held Seminal movie camera mounted on a WWII machine gun. He met Andy Warhol and then ventured to NYC where he made many films with The Silver Factory such as Lonesome Cowboys”, “Tarzan and Jane Regained...Sort of”, “San Diego Surf”, and “Taylor Mead's Ass”.

Another favorite film was “The Queen of Sheba Meets the Atom Man”. He made many films and cable independent movies with directors such as Anton Perich (“Hallelujah the Hills”), Michel Auder (“Cleopatra), Jim Jarmusch (“Coffee and Cigarettes”), Robert Downey, Sr. (“Babo 73”), and Wynn Chamberlin ("Brand X"). He worked with John Lennon and Yoko Ono on one of their films. He was the star of documentary by William A. Kirkley “Excavating Taylor Mead”. He volunteered and worked with many young film makers from NYU. He also did a Saturday Night Live segment featuring his beloved cats. (Taylor was well-known for feeding neighborhood cats).

On the stage, Taylor won an Obie for best off-Broadway actor for this work in “The General Returns from One Place to Another”.  He acted in Arturo Ui with Al Pacino.  He also performed in plays by Gary Indiana and many others.

As an artist, Taylor is well-known for his oils and whimsical sketches and has been featured in the Whitney Museum as well as many art galleries across the nation.

As an original Beat poet, Taylor was friends with the likes of Allen Ginsberg and Jack Kerouac. For nine years, he read his poetry regularly at The Bowery Poetry Club. His most recent book of poems is called A Simple Country Girl. He also wrote Taylor Mead on Amphetamines and in Europe. His book Son of Andy Warhol – his autobiography up to his life with Andy Warhol is yet to be published.

Taylor was fiercely loyal to his Lower East side neighborhood. Over 35 years, he witnessed an affordable artist mecca surrender to a gentrified high-rent district that left but few remains of the lush creative culture that pervaded the streets. The streets and buildings turned into a skyline of scaffolding. Taylor decided to take a break from the noise and dust to visit family and friends in Denver and New Orleans before returning to Manhattan. Unfortunately, a stroke ended his planned return and his most colorful life. Surrounded by family and friends, he passed away peacefully May 8th. He was seen to gestured his special royal wave and say “Bye. Whatever”.

Taylor was predeceased by his parents, Harry H. Mead and Priscilla Wood Mead, and his brother H. Hudson Mead. He is survived by his nieces Priscilla Mead, Mignon Mead-Shikaly and nephew Hudson A. Mead as well as a great niece and 4 great nephews.

Brilliantly lucid and humorously fascinating to the end, Taylor led an incredible life filled with ups and downs.  An extreme independent and a fierce friend, a grateful guest and a delightful entertainer, Taylor Mead was unique and a true Superstar.

“Song:
I can't believe it,
but he's gone...
We'll find a poolside
by which we'll droolside
about the way he went
along...”

A memorial service will be held in late Summer or Fall in NYC.