As a teen living with my parents in Irvington, New Jersey I would take the #25 Springfield Avenue bus to downtown Newark Penn Station where I would board the PATH train (then called ‘The Hudson Tubes’) into Manhattan. Then I’d get off at the Christopher Street stop in Greenwich Village where I sometimes liked to hang out. At one of these forays into the Land of Bohemia I wandered into The Gaslight which was a poetry and folk singer cellar club on MacDougal Street. This was the late fifties and the first night I showed up there was a Beat poetry reading taking place. A group of what was then referred to as ‘Beatniks’ were in town from San Francisco and they included Lawrence Ferlinghetti, Allen Ginsberg and Jack Kerouac among others. I had no idea who any of those who were reading were. Later I learned that I was in the company of Ginsberg, Kerouac, Gregory Corso, Jack Micheline, Ted Jones, and a happy sprite named Taylor Mead. I remember Taylor reading two Statue of Liberty poems. One went “Give me your tired, your poor, and let me blow them” and the other equally brief work read “There’s a dyke in the New York Harbor that has been carrying a torch for some lady for over a hundred years.” Allen Ginsberg tried to top Taylor with a short poem aimed at Kerouac. It went “Jack Kaahrooack – stop fuckin’ me up the ass – Jack Kaahroowack!” There was a sense of fun about it all and the crowd applauded. A photo of this event depicting Ginsberg and Kerouac – myself unnamed included – sitting at the feet of the two top Beats – appeared in the Sunday New York Daily News. The description read “A typical Beatnik crowd at the Gaslight in the Village” which of course I hid from my parents. Down the line I also made a point of discovering Village gay bars like Lenny’s Hideaway, Mary’s or The Old Colony; but that is a story for another day when being gay was a deep dark secret hidden from high school classmates and family as well.

Years down-the-road after a stint at Northwestern U. when I had actually moved into an apartment on Christopher Street with financial assistance from my father I had read in Confidential Magazine that Marlon Brando and Wally ‘Mr. Peepers’ Cox were sharing a Bohemian pad in Greenwich Village and that Brando was studying with Stella Adler. Following my idol Brando’s example I decided to do the same, signing on for a two year acting course at Adler’s famous school.

I came into contact with Taylor Mead again when he showed up in 1965 to see The Bed at the Caffe Cino coffee-house theater, my play about two men stuck in a time-warp drinking and drugging who cannot get out of their bed of dissolution. Taylor was intrigued by the slowed-down time of the play and in particular by the young handsome boys-in-the-bed theme. Afterwards we went out to the San Remo Bar where Taylor liked to hold court while drinking up a storm. After that time I would often see Taylor at Andy Warhol’s Silver Factory uptown where Taylor was starring in Warhol movies. Andy had come to see The Bed and decided to film it as a split-screen movie with over-lapping dialogue. 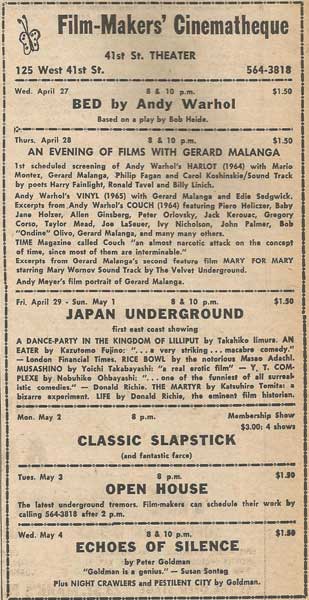 The Bed opened at the 41st Street Cinematheque under the aegis of Jonas Mekas in the Spring of 1966. At the Warhol Factory I also acted opposite Jack Smith in Warhol’s films Dracula/Batman and Camp and so it was at that time that Taylor and I became companions who were caught up in the craziness of the Warhol scene. Many times Taylor, with eleven Warhol films to his credit, would take a group of us ‘Warholites’ out for one of his lavish dinners; Taylor always seemed to have excess cash on hand ostensibly sent to him intermittently from his wealthy relatives in Grosse Pointe. Over the decades into the 70s, 80s, 90s, and even into the new millennium we continued to have – Fun! Fun! Fun! – at all the ‘in’ places all over town be it Studio 54 or maybe just some down and out dive on the Lower East Side where Taylor lived. I saw Taylor as a true original, as a comic, as a poet, actor, painter, and bon-vivant gentleman-about-town who loved the topsy-turvy merry-go-round of a good time in Manhattan.

His ascerbic wit was comparable to Oscar Wilde’s and he never suffered fools or opportunists who were on the make or take. At one point I was a regular on his Soho radio show where we loved to chat it up and gossip on the air. This enduring deep friendship continued right up until Taylor’s death. One of the highlights of my many memories with Taylor was going with him to Andy’s funeral in February of 1987 which was held at St. Patrick’s Cathedral with Brigid Berlin conducting the memorial ceremonies. That was followed up by an after-farewell-gala at Billy Rose’s Diamond Horseshoe Club in the Broadway theater district. It seemed like all of New York’s social set was there including Calvin Klein, Yoko Ono, Claus Von Bulow, and Factory photographer Billy Name who mysteriously showed up after a 13-year disappearance.

Taylor was always brought uptown to the Warhol birthday parties in one of Hoop’s special Artmobiles and was always presented with his own bottle of Dewar’s or Cutty Sark. At one of these celebratory events I showed the Danny Williams footage from Andy Warhol’s film of The Bed. Taylor in the silver-foil lined back-room theater with the other VIP’s watched the two boys-in-bed and seemed awe-struck. He then asked to see the one-hour ‘Bed’ footage again and we obliged by running it a second time, along with a new short film of Kenneth Anger’s entitled Mouse Heaven. The good times for Taylor came to an end soon after this last party; but one can never forget him, a great friend and cohort, a Warhol superstar, actor, artist, clown, Beat poet, raconteur, and mad-man-about- town who always had a mischievous smile on his face and a twinkle in his eye.