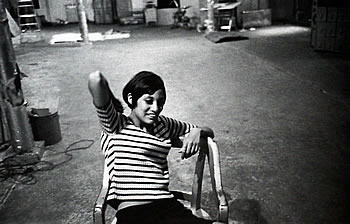 In addition to appearing in an Andy Warhol Screen Test in the Autumn of 1965, Pat Hartley also appeared in Prison with Bibbe Hansen and Edie Sedgwick and My Hustler II with Paul America. (AD89)

The filmmaker and actress Pat Hartley was a New York teenager when her Screen Test was filmed at the Factory in the fall of 1965. Hartley also appeared in two other Warhol films from 1965: Prison, with Bibbe Hansen and Edie Sedgwick, and My Hustler II, with Paul America. She later appeared in John Palmer and David Weisman's Ciao! Manhattan (1967-72) and in Chuck Wein's 1972 film Jimi Hendrix: Rainbow Bridge. She and her husband, Dick Fontaine, have made several documentary films together, including a film about James Baldwin, I Heard It Through the Grapevine (1982), and Art Blakey: The Jazz Messenger (1987). (AD89)

It was the summer after I graduated from high school. I thought I was going to Hunter College, but I failed everything in high school, and now I was going to go to this hideous twilight session. I couldn't cope with it. So my friend and I went to have a drink in the Right Bank. The bartender was Tommy Goodwin, who was driving Edie [Sedgwick] around at the time... I think Chuck [Wein] had just come back from Europe; he had on this white suit. I think he'd just come from having a drink with the man who assassinated Rasputin, I remember that detail. Also with the guy who used to shoot drugs in his eyeball, William Burroughs - he'd been drinking with him... We ran into Chuck there a couple of times... I remember we used to go to - the Dom hadn't really opened yet - Stanley's Bar. We were hanging around the West Village. We'd just go sit in the 9th Circle... Then Stanley opened the Dom, and he had this fat jukebox, this ten-mile bar, just a dance joint on St. Mark's Place. I think we met there one night, and that was when Chuck took us to the Factory.

There seemed to be a lot of sex going on... What I saw at the Factory didn't freak me out because of what I'd already seen. It actually seemed like a world full of consenting adults... People showed up to do do whatever it is they wanted to do and got it done... I wasn't an artist, I'm not a painter, I always wanted to be a movie star. Suddenly the camera appeared, and oh, I thought, this will be an extra. The only reason I was there is that it was something special, something was actually happening, and that generated a lot of excitement... My feeling was one thought - a lot of things were going to happen, and I'm actually stunned at the things that didn't get made, the things that didn't happen... (VY57-8) 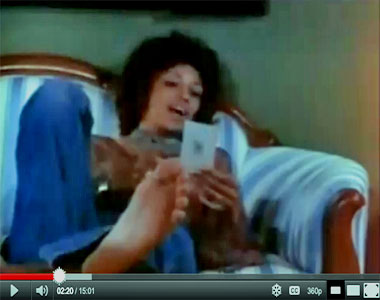 Pat Hartley in Rainbow Bridge on You Tube here.

Other non-Warhol films that Hartley appeared in included (in addition to Ciao! Manhattan and Rainbow Bridge) Jim Hendrix (aka A Film About Jimi Hendrix) (1973) and Absolute Beginners (1986) and Double Pisces, Scorpio Rising (1970). (MG)

Double Pisces, Scorpio Rising was an experimental film directed by Hartley's husband, Dick Fontaine. When it played the New York Film Festival in 1970 Howard Thompson reviewed it for the New York Times.

Toward the end of Double Pisces, Scorpio Rising, three people whimsically look in on a pig slaughterhouse, as the color camera bobs around, cinéma-vérité, catching their casual reactions to the commotion around them — the piteous squealing of the terrified animals who are dangled, butchered and quartered. Some of the close-ups of these poor critters are pips.

One of the human trio is Dick Fontaine, the director, a thin, long-haired youth who has put together this highly personal exercise on something or other that runs, mercifully, for 58 minutes and comes from an English group of movie folk called the Tattooists. The second visitor to the animal abattoir is a pretty girl. The third is a porky, middle-aged man addicted to the expression, "Ya know?"

The pigs, the ones we see, don't stand a chance, ya know? Nor does anyone else who doesn't happen to know Mr. Fontaine personally and wonders what he's getting at. The first part shows smiling glimpses of Norman Mailer, in a neat suit and tie, amiably campaigning for Mayor. We see him riding the Coney Island roller coaster

Then we're off on Mr. Fontaine's own visual roller coaster, watching and hearing him inside a television studio as he chats and clicks his camera. At home he dials the phone repeatedly. He visits his childhood home and reminisces with a pensive woman portraying his mother.

The chapter also includes close-ups of the pretty model, Jean Shrimpton, reading a fable that implies soul-searching. And we see Mr. Fontaine again, this time crouched on the roof of what appears to be a school, assembling a machine gun. "The audience," he tells us, "waits for me to begin." Amen." (NYT4)

Fontaine, who first worked as a researcher at Granada Television in England, won a BAFTA award as one of the founding members of Granada's World in Action series in 1963. In 1995 he was made Head of Documentary at the National Film and Television School in Beaconsfield, Buckinghamshire, England.

Hartley and Fontaine ran Grapevine Pictures in New York - a film production company specializing in documentary, music and original drama. It was under the auspices of Grapevine Pictures that Fontaine and Hartley co-produced I Heard it Through the Grapevine (1982) and Man With A Mission - Art Blakey: The Jazz Messenger (1989).