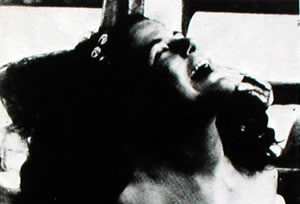 Naomi Levine in
Tarzan and Jane Regained... Sort of

In POPism, Pat Hackett, writing as Andy Warhol, refers to Naomi Levine as "my first female superstar." Naomi Levine was also the first of Warhol's female superstars to appear naked in one of his films. (L&D183) In October 63, Andy and entourage went to Los Angeles for his second show at the Ferus Gallery (Liz/Elvis). While in LA they shot some footage for Tarzan and Jane Regained... Sort Of at the home of John Houseman, arranged through a friend of a friend of Wynn Chamberlain who was part of Andy's entourage. When they went to the pool, Naomi stripped off completely and jumped in. (POP44) Naomi had flown to LA separately in order (according to her) to raise funds for Jonas Mekas' Film-Makers' Co-Op. Gerard Malanga and Taylor Mead, who had driven there with Andy, claimed that Naomi was actually in love with Andy and she was disappointed that they hadn't asked her along. (POP43-4) According Warhol biographer Victor Bockris, Levine flew back to New York after Warhol screamed at her angrily for trying to pull his wig off during a visit to Disneyland. (L&D184)

"I do not remember, strange as it may seem, but I could put it this way: In 1962, '63, '64, Film Makers' Cooperative was located at 414 Park Avenue South. It was much going, those years. It was a very busy period in New York in the Independent Film area, and the Co-Operative was the meeting ground for, ah, during that period, where the filmmakers stopped by during the day. During the evening, I was living there in the back of the Co-Op space. I gave the front of my space to the Co-Op - the front part was the Co-Op proper during the day. In the evening, it was a sort of night co-op, and during the evenings or afternoons, whenever a filmmaker felt that he wanted to show films to a friend or some[one], he could come in and screen. There was always projectors set up. And in the evenings, practically every evening, there was some little screenings... It was only that filmmakers knew and friends knew that, and this increased when we seemed to have at some films problems, censorship-wise, with public screenings. So, those films were usually screened by filmmakers and their friends at the Co-Operative.

So, he's been there watching those films at the Co-Op, at my place, but I did not know that that was Warhol, as I did not know many other people. So, then, I think, I met him probaby at her place, and then, I recognized him. Yes, I have seen him there. It was Warhol.

In March 1964, the Gramercy Arts Theatre was closed by the License Department and the Film-Makers' Cooperative moved to the New Bowery Theatre. In his yearly round-up of notable underground cinema events during 1964 (published in the 7 January 1965 issue of The Village Voice) Mekas wrote that in April 1964, "A dark period in the New York film underground begins. No screenings for seven months. With no place to meet, film-makers' spirits go low. Clandestine screenings continue at the Co-op late into the summer, until the Co-op is raided and cops are placed nightly across the street." In November 1964 the Film-Makers' Cinematheque started using the New Yorker Theatre for screenings. The opening bill included Naomi Levine's film, Yes. (JM174-75)

Mekas also wrote a regular column for The Village Voice called "Movie Journal" and was an early supporter of Levine as an underground filmmaker:

"Naomi Levine has just finished her first movie. It is like no other movie you ever saw. The rich sensuousness of her poetry floods the screen. Nobody has ever photographed flowers and children as Naomi did. No man would be able to get her poetry, her movements, her dreams. These are Naomi's dreams, and they reveal to us beauty which we men were not able to rip out of ourselves - Naomi's own beauty." (JM89)

In his 5 December 1963 column he mentioned Warhol's Kiss films which featured Naomi:

"Strange things have been going on lately at the Film-Makers' Showcase. Anti-film-makers are taking over. Andy Warhol serials brought the Pop Movie into existence. Is Andy Warhol really making movies, or is he playing a joke on us? - this is the talk of the town. To show a man sleeping, is this a movie? A three-minute kiss by Naomi Levine, is this art of kissing or art of cinema? If it is not cinema then what is it?" (JM109)

In addition to the Kiss film and Tarzan and Jane, Naomi's other films for Warhol included Batman Dracula and Couch.

Mekas interviewed Naomi Levine for his 24 December 1964 column. A copy of the interview can be found here.

Mekas also edited and published the underground film journal, Film Culture. He included Naomi in the photo feature, "Stars of the 'New American Cinema'," in the Summer 1964 issue. It also included photographs of Andy Warhol on two pages. Naomi was featured on four pages. 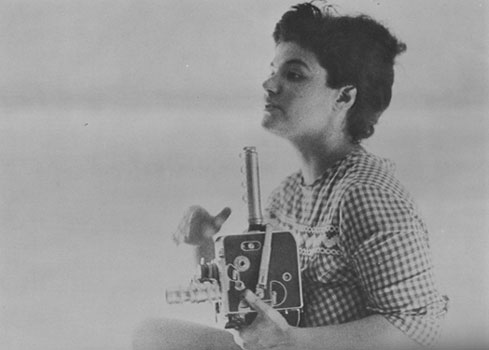 It's not known why Naomi left the Factory or left New York. According to Victor Bockris it had something to do with Edie Sedgwick's arrival. Bockris claims in The Life and Death of Andy Warhol that "Edie's sudden rise to star status at the Factory delighted the gay boys... but her arrival was noted with chagrin by the other women... the temperamental, demanding Naomi freaked out, screaming at Andy that everything was his fault, and had to be hauled out onto the stairwell by Billy Linich [Name], slapped in the face and told to get the fuck out." (L&D222)

FILMS BY NAOMI LEVINE (16mm)
(available from the Filmmakers Cooperative)