Andy Warhol superstar, Joe Dallesandro, was banned from Holly Woodlawn's bedside during her last week of life. He was not on the visitation list maintained by Holly's medical proxy, a real estate agent named Robert Starr. According to a family relative, Joe had to "fight" to see Holly the day she died.

After complaints were made about the lack of visitation rights, Robert Starr offered to meet Joe on the Sunday that Holly died at a specific time, but Starr was told that Joe would go to visit Holly when he wanted to - not when Starr dictated. He wasn't about to let Starr tell him when he could and could not visit his old friend and co-star in Trash.

According to someone close to the family, Joe had been fighting to see Holly for over a month. Joe managed to get in eventually and was with Holly when she died. According to the relative, Holly was waiting for him.

Paul Morrissey, who directed Holly and Joe in Trash (produced by Andy Warhol), was also not on the list and was not allowed to speak to her by telephone before she died. When Paul later heard that Joe was there with her during her last minutes of life, he broke down and cried.

Joe Dallesandro will NOT be going to the private memorial party planned for January 17, 2016 at the Chateau Marmont because he does not believe that the funds donated by fans to a Go Fund me campaign called "Bring Holly Home" should be spent on a private party.

The official Campaign Organizer for the fund was Penny Arcade whose real name is Susana (or Susan) Ventura. Years ago Arcade made the news when she tried to wrest control of filmmaker Jack Smith's archive from his family. Needless to say, she lost the case. That case was covered in the Village Voice by Cynthia Carr.

"Acrimony against Arcade runs high enough among Smith's friends, though, to persuade that one to request anonymity... Some still resent Arcade for getting Smith's keys and taking control. Arcade says Smith gave her permission to use the keys "when he told me where to find the bonds."

I am also interested in getting in touch with anyone who has information about Arcade's possible involvement with fundraising after the photographer Leee Black Childers had a stroke in Holly Woodlawn's apartment. Email me here.

When Joe Dallesandro raised his concerns about money from the Holly Woodlawn fund being spent on a private party, Penny Arcade gave the excuse on her Facebook page that Robert Starr said "that Marilyn Monroe didn't have all her fans at her funeral and that Holly has thousands of fans it would be near impossible to have them all at a memorial." She continued by saying "I monitor the Go Fund Me site... there is not one negative post by any fan... or anyone else." [The dots and the lack of punctuation are hers and do not indicate missing words - they just indicate bad grammar.]

Joe responded to Penny on her page but Penny later removed his posting. Here is what Joe posted: 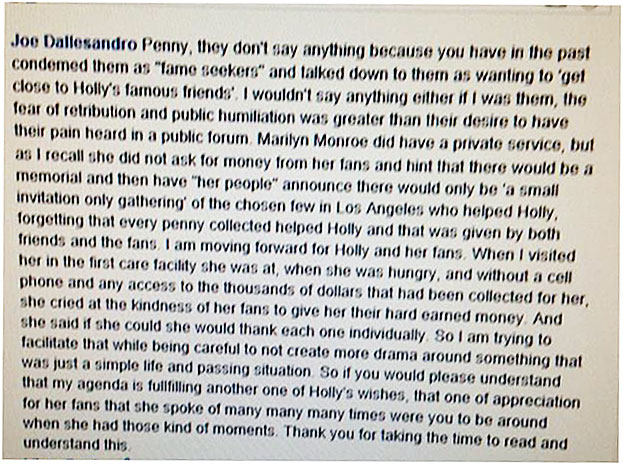 As stated in previous updates and in my main essay, the person mentioned by Penny, "Robert Starr," was the person that Holly, allegedly, designated as her "medical proxy" and the executor of her will. According to one long-term friend of Holly who I have spoken to, Holly's father Joseph was not consulted when she signed the papers. Holly's father is still alive and lives in Florida.

Penny Arcade, herself, noted on the Go Fund Me page that "When Holly was admitted to the hospital, she was violently incoherent and placed in restraints for her own protection." There is no indication of how long Holly was kept in restraints and whether she was still in restraints or heavily medicated when she made Mr. Starr her medical proxy and/or the executor of her will.

One person who has known Holly for a number of years said that Mr. Starr and Robert Sherman (who is helping to organize the party) hardly ever visited Holly before she became ill even though they lived nearby. The same person told me that Holly "hated" Penny Arcade. Penny did not visit Holly during the time she was ill.

I have asked for a public accounting of how the donated money was spent on numerous occasions but none has been forthcoming. It's a simple request and could clear up a lot of questions. The expenses should be listed clearly. In the Updates section of the Go Fund Me site, for instance, it is hinted that a special doctor was paid for by the fund. Yet, in correspondence I have seen, Penny Arcade has said that "Robert brought his own oncologist to take care of Holly before the fund started..." The whole thing just needs a little more clarity. As Holly was on SSI, the state would have picked up medical expenses.

Ms. Arcade's latest diatribe on the Go Fund Me page is Update 49, dated yesterday January 10th. (Usually fund organizers post one or two updates - Ms. Arcade is on her 49th). In Update 49 she writes about the criticism of the handling of the fund: "Most people who know about what I am about to tell you think [sic] flood of sewerage has only been poisoning the memory of Holly for one week but the truth is these vile lies and disinformation have been going on sinceI [sic] began this blog last year." Say what? Does anyone understand that?

If by "flood of sewage" she means my criticisms, I posted my original essay on January 2nd. I certainly have not been criticizing her for months. I don't have the time. I was not in touch with any other people involved with this situation when I write the main essay. I originally got all my information entirely from the Updates on the Go Fund Me page or from Facebook. Most of it consisted of quotes from Penny. The original essay, "Questions raised over Holly Woodlawn fund," is here.

In her latest update, Ms. Arcade goes on to say that "yesterday I found out that a person who has purported themselves [sic] to have been one of Holly's closest friends... made a statement publicly posted to the internet which is so vile, so stupid and such a betrayal of Holly that I feel I have to make a public statement."

Penny then goes on to say "yesterday this largely obscure Warhol site..." At last something concrete! Warholstars.org is my website. It has been going for over ten years and, as listed in the "info" section of the site, has been mentioned in over 40 books, including the Warhol catalogue raisonné. Here is what Kenneth Goldsmith wrote about my site in his book I'll Be Your Mirror: The Selected Andy warhol Interviews 1962 - 1987:

"Although I've never met him, I must acknowledge Gary Comenas, creator of warholstars.org, a site I visited daily during my research. Gary's site could be the very best resource on Andy Warhol there is - either in print or on the web."

In her update Penny then goes on to say "Then this same attention seeking person showed a video of Holly from their visit when Holly was desperately ill..." You've got it wrong Penny. It was a different person than you suggest. I'm not even sure you know the person.

You then go on to repeat that Holly was "restrained in bed" and "quite simply out of her mind." If she was out of her mind, was she in a state to make a conscious decision as to who she would legally elect to look after her affairs? Where was her father in all of this?

You continue, "Now this ugly video has been made public by people who never lifted a finger to care for Holly..." No it hasn't. Where is it public? How do you know the person who made the video never helped Holly if you don't know who the person is?

According to you, "these cretins started to demand a spreadsheet for how Holly's funds were being spent back in August!" I'm not sure who you are referring to as "cretins" but I think a spreadsheet is a great idea.

If the spreadsheet had been started when the fund was started, we wouldn't have this problem now. Why wasn't it? Doesn't Mr. Starr know how to do a spreadsheet? I agree with "the cretins." I think most reasonable people would.

I will say one thing - for someone who complains about being slandered so much, you do like to resort to name-calling. I think you also called me a "cretin" on your Facebook page. This isn't the Jerry Springer show Penny. My comments have been rather civilised and sane. Why can't yours be the same?

In regard to your claims of superstardom, in correspondence I have seen you write that you are "not in any books because none of those people do primary research or else they would HAVE to have me in the book because I was clearly in Women in Revolt etc..." Surely you're not suggesting that no authors of any book about Warhol have done primary research? Don't you think that's a bit over the top?

As already noted, you were in only one Warhol film, Women in Revolt, for about five minutes. You were not mentioned in the New York Times review when the film was originally released nor were you listed in the New York Times review as a cast member. That review is here. I can only say, please everyone, get a copy of Women in Revolt and watch it and judge for yourself.

The more you go on, Penny, the bigger the hole you dig for yourself. People in glass houses shouldn't throw boomerangs. All I have done is ask for an accounting of the money that was spent. Don't you think that seems like a reasonable request? Why does that question provoke so much animosity? Methinks thou dost protest too much.