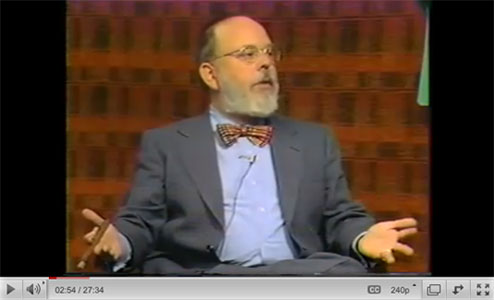 Henry Geldzahler being interviewed by Barbaralee Diamonstein in 1978

Belgian-born Henry Geldzahler was born in Antwerp on 9 July 1935. He immigrated to the states with his family in 1940. He graduated as an undergraduate from Yale in 1957 and started working for the Metropolitan Museum of Art in 1960. In 1966 he took a leave of absence from the Met to to become the first director of the visual-arts program of the National Endowment for the Arts. He also served as the United States commissioner to the Venice Biennale in 1966. In 1977, he was appointed as the Commissioner of Cultural Affairs for New York City. In 1982 he left the goverment and served as the Distinguished Guest Curator at P.S. 1 in Queens from 1982-6. In 1987 he became the curator of the Dia Art Foundation gallery in Bridgehampton and remained there until his death on 16 August 1994 at the age of 59. (PGH) According to his New York Times obituary, "He traced his love of art to an experience at an exhibition of the work of Arshile Gorky at the Whitney Museum he saw in 1951, when he was 15." (Paul Goldberger, "Henry Geldzahler, 59, Critic, Public Official And Contemporary Art's Champion, Is Dead," New York Times, August 17, 1994) Geldzahler's interest in Gorky was also mentioned in the Warhol biography, Pop: The Genius of Andy Warhol, by Tony Scherman and David Dalton:

Cultivated but also hip - a pot smoker who, by 1965, had experimented with a wide range of mind-altering drugs - Henry was alive to the next new thing, not only in art but in the realms high or low beyond it... An extremely bright child with a low boredom threshold (as an adult he was diagnosed with ADD)... Geldzahler was fond of telling how, at fifteen, he had gone to a show of Arshile Gorky's paintings, 'stayed three hours, came home, threw up, slept for eighteen hours,' after which he resolved to become a curator. (SC82)

According to Warhol biographer Victor Bockris, Andy met Henry through Ivan Karp, who was working for Leo Castelli. Warhol and Geldzahler became friends, talking on the phone daily and going to dinners and parties together. (L&D138-9) In an interview that Henry gave Warhol scholar Patrick S. Smith in 1978, he talked about meeting Warhol and showing him paintings by Florine Stettheimer. According to Smith, Geldzahler met Warhol in August of 1960.

...she [Florine Stettheimer] was a wealthy society lady, ah, in New York in the 1910s, '20s and '30s, who was a very good primitive painter. And there was a very good show over at the Museum of Modern Art in 1936. There's a book by Parker Tyler, devoted to her work. And the Metropolitan has her four major pictures of cathedrals: The Cathedral of Art, The Cathedral of Broadway, The Cathedral of Fifth Avenue and The Cathedral of Wall Street. And, ah, the day I met Andy, I mentioned that these were pictures that would interest him, and he said that he would like to come and to see them, and the next day he came to the Met, and I showed them to him... She was a protégé of Marcel Duchamp and that sort of New York City avant-garde clulture - Virgil Thomson.

I think Andy's first attempt at a movie was an 8-mm job when I lived on 84th Street and Central Park West. He just rented a little camera and came in and did a three minute movie where I was smoking a cigar, and, then I threw the cigar in the toilet, and I brushed my teeth, and, then, I flushed the toilet. For all I know, it was never printed. He was just trying to see what it looks like through a camera. (PS305)

That footage apparently pre-dates Warhol's film, Henry Geldzahler. After Geldzahler's description of what he remembers was an 8 mm film, Smith asks him "Didn't he [Warhol] make one where you sat on a stool and smoked a cigar?" Geldzahler answers "Yeah, '64."

The day after he shot Empire, Andy Warhol used the leftover film from Empire to shoot Geldzahler sitting on the Factory couch on Sunday July 26, 1964. According to Geldzahler, Warhol was absent from most of the shooting. After setting up the camera, he went to make some phone calls, occasionally returning to make sure the camera was running properly. (FAW20) Henry sat there, staring into the camera, smoking a cigar and becoming increasingly uncomfortable.

Henry and Andy began to drift apart in 1965 when Henry and his boyfriend, Christopher Scott, moved in together.

... there's nothing more depressing than calling up somebody you've been calling up for years, any time of the day or night you felt like it, and suddenly someone else is answering the phone and saying 'Yes, just a minute.' It takes the fun out of it...I could only be really good friends with unattached people... if they're married or living with somebody, I would just forget them, usually. (POP139)

Although they continued to speak on the phone "every other day or so," (POP195) Andy and Henry further drifted apart in June 1966 according to Popism, when Geldzahler was appointed the commissioner for the Venice Biennale and didn't tell Warhol, who read about the appointment in the New York Times. He also didn't use any of Andy's paintings in the show.

In addition to the film, Henry Geldzahler (1964), Warhol also produced a silkscreen on plexiglas of what appears to be a segment of a film roll with four images of Geldzahler in 1966. I

David Hockney, who had been introduced to Geldzahler by Warhol, also did quite a few drawings of him - including one "when he'd first been told" he had cancer of the liver. Hockney later recalled, "I went to see Henry a lot when he was dying, back and forth to New York when he was looking like he was beginning to fade away. He died within three months of being told he had liver cancer. I made one drawing of him, when he'd first been told. Henry asked me to draw him and he wasn't looking good. I would not normally have drawn him like this, but when he asked me, I did." (See Hockney interview here.) ("David Hockney: Living Large with Two Small Dogs," William Turner Gallery, accessed 2017)

For more information about Henry Geldzahler, type his name in the search engine and scroll down the results page: