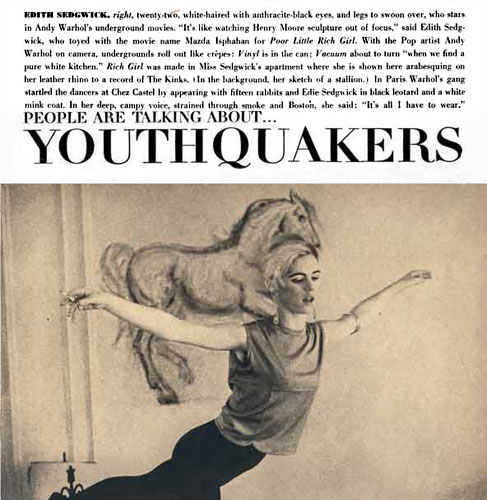 Edie Sedgwick as a "youthquaker" in Vogue magazine (1 August 1965)

Poor Little Rich Girl was originally conceived as part of a series of films featuring Edie Sedgwick which Warhol started shooting in March 1965 called The Poor Little Rich Girl Saga. It included Restaurant, Face, and Afternoon, as well as this film. The title is the same as a 1936 movie starring Shirley Temple who Andy idolized in his childhood. (FAW20)

The film takes place in Edie's apartment. Andy and Gerard shot two rolls (approx. 70 mins) of Edie as "she lay on her bed, talked on the phone and walked around her room, showing off her clothes and describing how she had spent her entire inheritance in six months." (L&D221)

When the rolls were processed, they were completely out of focus because of a problem with the camera lens. They re-shot the two long takes, adding it to the first reel so that the first 33 minutes of the film are completely out of focus as Edie wakes up, orders coffee and orange juice, smokes cigarettes does her excercises, takes pills and puts on make-up - all done in silence, except for the background music of an Everly Brothers album. (FAW22/L&D221)